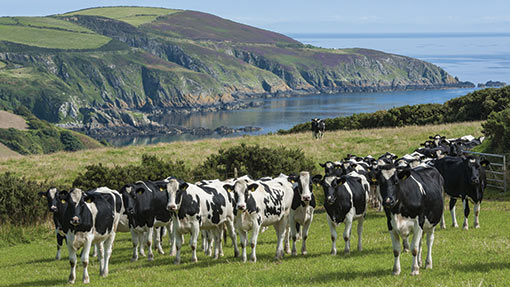 DEFRA launched the £5m Dairy Fund in July 2012 in the aftermath of milk price protests and the SOS Dairy summit.

After a long application process, nine grants of varying sizes were awarded earlier this year to help groups of farmers co-operate to become more competitive, reach new markets and strengthen their position in the supply chain.

A wide range of groups and businesses is benefiting from the funding – DEFRA hopes the new and stronger co-operative groups that emerge from the process will serve as examples and inspire other farmers to do the same.

The Dairy Fund cash for collaboration was an early birthday present for Dairy Crest Direct (DCD).

The Dairy Crest suppliers’ group celebrated its 10th anniversary in April. It has 1,100 dairy farmer members producing more than 1.5bn litres of milk, with herd sizes ranging from fewer than 20 cows to several thousand.

DCD will use its Dairy Fund cash to help investigate new projects that go beyond fighting for price.

“We are not a co-op in the traditional sense, but we closely co-operate to develop creative ways of working with our producers and with Dairy Crest. Collaboration is essential,” said DCD secretary Michael Masters.

The first new project will be to research the group’s structure. Currently a company limited by guarantee, DCD’s directors have commissioned consultant Promar to investigate becoming a dairy producer organisation, a legally constituted group better able to negotiate milk contracts on behalf of members.

Next, DCD will develop more contract options for its farmers by working with independent consultant Stephen Bradley, who created the original liquid formula.

A third project will explore futures and hedging mechanisms, so farmers could potentially sell a proportion of their milk forward for fixed terms at a fixed price.

The Royal Association of British Dairy Farmers’ (RABDF) award will help a range of groups this year, including Phoenix Milk.

This farmer group has been pooling milk and marketing it to processors for the past two years.

South Gloucestershire dairy farmers Mike and Chris King and Chris and Lucy Simmonds needed to find a home for their milk fast when their milk buyer folded in February 2012.

By the end of the first evening they had arranged transport and could have sold their milk three times over, eventually settling on a nine-month fixed-price contract.

They rode out the mid-2012 milk price crash with a 4p/litre premium on the market average and soon others wanted to join.

Today Phoenix Milk sells 21m litres of milk for its members. It secures six-, nine- or 12-month contracts with processors which pay a set base price, with movements fixed to a commodity basket.

“We are pooling our strengths to gain a bit more certainty and some strength,” says founder Mike King, who milks 500 pedigree Holsteins with his brother, Chris.

“We have a huge vested interest in doing the best job for our members, because the four company directors have more than 1,000 cows between them.”

While the business is a limited company, it runs like a co-op.

Farmers receive the processor payment, less Phoenix Milk’s running costs, and every farmer has open access to the accounts.

The directors will only consider those producing more than 1m litres and keep the supplier network local to control haulage costs.

Phoenix Milk wants to use the RABDF scheme to grow its milk pool further and explore the possibility of group buying for feed and seed.

“We would like another 10-15m litres,” Mr King says. “We are not brokers. We are a conduit for pooling milk and working together with processors. We are not trying to make a margin at all.”

Group buying of feed and fuel is nothing new, but one North West co-operative wants to expand what it can do for its members.

Cheshire co-operative Bollin Farmers will use its £23,000 Dairy Fund grant to increase membership and see where else it can save farmers money.

Between 20 and 30 producers centred on the river Bollin formed the co-operative about 30 years ago with the aim of buying farm inputs as competitively as possible.

Today there are just eight members, spread across 10-15 miles and all with between 100 and 300 cows.

Co-op secretary and HarveyHughes consultant Andrew Nicholas said finding new members was important to get the best savings. By the end of the year he hopes membership will have doubled.

“In our part of the world, the feed companies are becoming bigger and more powerful.

To grow, Mr Nicholas will keep advertising to word of mouth and consider expanding the co-op’s radius to about 50 miles.

For the first part of the Dairy Fund project, Bollin Farmers will hold six meetings led by expert speakers on topics such as co-op structures, herd health and milk contracts.

Mr Nicholas wants these meetings to consider if collaborative activities can be extended beyond feed, fuel, sprays, fertiliser and vet supplies.

“I want to drive Bollin to look at marketing our products,” he said. “As dairy farmers we sell milk, but there are other areas as well, like calves and cull cows.

“On the milk side we are not quite big enough. We need more buying power to sell milk to dairy companies.

The second half of the project will be another five expert-led meetings in the autumn and winter, where the members will work out how to put its ideas in action.

Sheffield firm Our Cow Molly is certainly the most colourful of the Dairy Fund initiatives.

But the ice cream and fresh milk producer with bright pink branding is serious about collaboration and local food.

The Matthew family has 80 cows and 30 sheep on its 200-acre farm four miles from the city centre, where brothers Eddie and Dan manage the ice cream and fresh milk, Dad does the milking and Mum looks after the books.

They bottle about 8,000 litres/week, which they deliver to 20 shops, delis and cafés at a premium price of £1.39 for two litres. 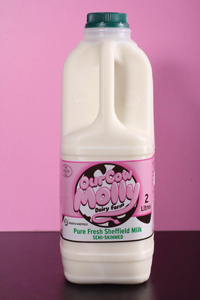 The £140,000 Dairy Fund grant will go towards the construction of a new £500,000 milk processing unit. Bottling capacity will grow to 40,000 litres/week, which will allow the producer to supply the 15 shops on the waiting list for its milk.

“This is about being able to put the volume through the dairy to make it run efficiently,” said Eddie Matthew.

“We are four miles from 500,000 people, so the scope to supply milk is on our doorstep. We have pushed this idea of super-fresh milk; this is not something you get from a supermarket. It is such a fantastic selling point for all dairy farms.”

The two neighbouring farms will also be able to supply some of their milk to Our Cow Molly on a contract paying a premium over one of the major processor’s prices.

Mr Matthew believes working together and adding value is vital for the future of his family’s and his neighbours’ dairy businesses.

“All I have seen since I was little is nearby farms shutting down,” he said. “We could have just closed up and gone into tourism but it just seemed a little bit wrong.

“If we can stem the flow of dairy farms packing up we will do what we can.

“We are doing it for the kids. By the time we have paid off the bank loan, me and Dan will have both retired.”