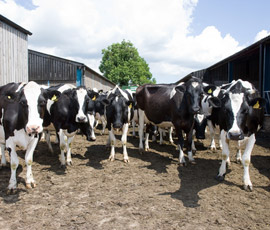 EU proposals to return to the days of supply chain management following the abolition of milk quotas in 2015 have been fiercely rejected by the dairy industry.

The EU Parliament-backed proposal, which is part of CAP reform discussions, would see supply chain management measures imposed for up to three months “in the event of a severe imbalance in the market for milk and milk products”.

Under the European Parliament amendment to Article 156a, during these times, dairy farmers who voluntarily cut production by at least 5%, compared with the same period in the previous year, would be granted aid.

While, those who increased their production by at least 5% compared with the same period in the previous year, would be forced to pay a levy.

“Dairy farmers work with the knowledge that controls on how much milk they produce will end in 2015. But there are some in Europe who would like the supply of milk within the EU to remain shackled through the back door,” said NFU dairy board chairman Mansel Raymond.

The union supported the existing tools designed to act as a market safety net in times of volatility – intervention, public storage and direct payments to dairy farmers.

“However, there should be no place in a modern market-orientated CAP for supply management measures that penalise farmers for increasing their production,” said Mr Raymond.

“In a world of growth opportunities, seeking to address price volatility by reducing productive capacity is self-defeating,” he said.

“The European dairy market is now an extension of the world market. Supply management could only work if Europe sheltered the industry behind a raft of subsidies. The budget is no longer there for that.”

NFU Scotland milk policy manager George Jamieson said the EU proposals didn’t make sense as they would leave the door wide open to competitiors such as the USA and New Zealand looking to capitalise on emerging markets.

“Global growth in the dairy market is such that demand is expected to outstrip supply,” he said. “Manipulating supply will not help this.”

Starting up in dairy