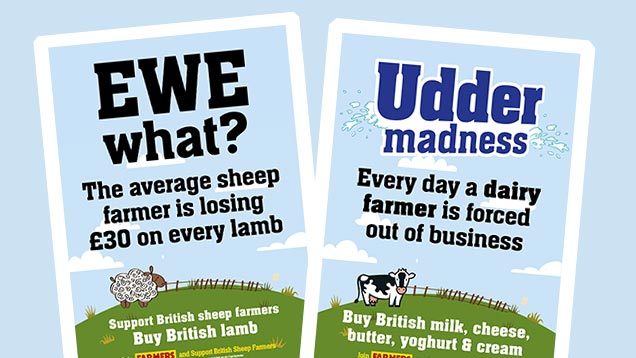 Our dairy and lamb crisis posters have attracted a lot of attention – and so have their shocking statistics.

But how did we work them out?

Every day a dairy farmer is forced out of business

Farmers are suffering from milk prices well below their typical production costs. For many, it’s no longer viable.

Food Standards Agency figures published by AHDB Dairy show there were 9,960 dairy farmers in England and Wales in January. By August that number had fallen to 9,724.

That means there were 33 fewer dairy farmers each month – a little more than one every day.

But even that number is an underestimate for those quitting, as there will be some new starters too.

Auctioneers have warned more than 1,000 farmers could be forced to sell-up in 2015 due to the market crash.

The NFU has claimed the number of British dairy producers could halve to 5,000 in just 10 years if the current rate of decline continues.

The average sheep farmer is losing £30 on every lamb

This stat has stunned plenty of people – but it’s right if you crunch the numbers.

Lamb prices have plunged this year, thanks to a weakening euro, strong supplies, poor skin values and New Zealand imports.

Latest estimates from AHDB’s Stocktake survey put the average cost of production for a lowland flock at 216p/kg liveweight. That works out to £91 for a 42kg lamb. It’s high as that counts oft-hidden costs such as unpaid family labour.

Last week, lamb prices averaged 145p/kg at British markets. This would have returned a farmer £61 for that 42kg lamb – leading to a £30 loss.

Yes, that’s based on averages and, yes, the most efficient producers won’t see such big losses.

But it’s a worrying sign of the brutal market farmers face, even in ‘better’ years.

Producers understand the mix of global factors hurting their prices. Though they want supermarkets to pass savings on to shoppers – to get demand for British lamb surging.