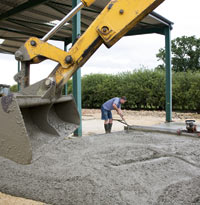 Dairy farmers adopting a piecemeal approach to herd expansion and increasing cow numbers without improving the farm’s infrastructure could be better off when they “think the unthinkable” and consider a bigger expansion plan to secure the farm’s long-term future in milk production.

Provided there’s a clear commitment from a dedicated family workforce with a proven “track record”,Yorkshire Bank’s Nick Marsh says dairy farmers should get the support they need from their bank.

“Dairying is still regarded as one of the most profitable farming sectors. Despite the volatility of the milk price, dairy farmers with a good track record looking to make borrowings to fund long term business expansion should meet with a favourable response from bankers,” says Mr Marsh.

Recent figures showed more than 60% of UK dairy farmers were involved in, or are planning to, expand their business. But is now the right time for those determined to remain in milk production to look to the long term and consider a “full blown” expansion plan rather than simply adding on a few extra cows?

Mr Marsh reckons as well as aiming to increase income from milk by raising herd numbers substantially, new investment made in the infrastructure can help improve herd management and the working conditions of staff – the latter of which is becoming increasingly important where herds need to employ labour from outside the family.

“We’ve seen many of our customers expand in recent years and we’ll continue to fund further expansion because we feel dairying, despite the current milk price situation, is still the backbone of family farming in the north and north west.

“Looking back 10 years many milk producers wouldn’t have dreamt they’d be milking the number of cows they are doing today, so it may well may be the time for those who are slowly edging forward on cow numbers, to look further ahead and consider where they want their business to be in ten years from now.”

But he stresses the family situation is a key factor – both from the way a milk producer views his future and the way the bank assesses it lending.

“Although there are producers leaving the industry, those who have decided to stay in milk production in the long term know that profitability will increasingly depend not only on the amount of milk that’s produced but how it’s produced in terms of housing, the parlour facilities and slurry handling.

“Dairying is “capital hungry” but in terms of return on that capital, we still see it as one of the most profitable sectors and the most successful in terms of generating income from a family-run business.”

But how does a bank factor-in the likely fluctuations in milk price when considering a loan application – particularly when even a small reduction in pence paid a litre can have a massive impact on income?

“We’re currently looking at one expansion plan where we’ve had to consider two milk price scenarios – one based on a 25ppl contract and another at 20ppl – although we know there are some producers receiving even less than that.

“In this case we’ve got to assess what variation in milk price this business has to cope with. But in general terms the actual volatility of the milk price isn’t deterring us from funding expansion plans that we feel are viable in the long-term providing all the other factors being considered are favourable.

“Modern dairy farming demands a long-term strategy. Piecemeal expansion is often superseded within a few years down the line, so family farms that are determined to stay in milk production need to assess the aspirations of the family members and ask where they all want to be in 10 years time,” says Nick Marsh.

The White family – Mick and Margaret and sons Dan and Craig – run a 480-cow flying herd at Wedacre Farm, Gisburn, Lancashire. Numbers have increased by 150 cows over the last three years with the major investment being a 50-point rotary parlour.

“We hit the ground running as we increased cow numbers, added some cow accommodation and installed the rotary parlour. The aim is to get to about 500 cows. When you’re in dairying for the long haul it’s about producing as much milk as you can from a system that’s as well run as it can be.

“We’ve made a big investment but it’s for the long term,” says Dan.