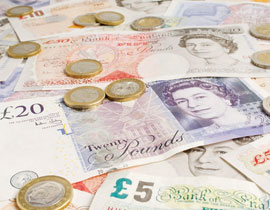 The first estimate of the income generated within the agriculture industry, including subsidies and adjusted to take inflation into account, shows the effect of the terrible weather during 2012.

The fall in income was down to a rise in costs, a drop in output and a decline in the value of direct payments because of changes in the exchange rate.

In the livestock sector the value of cattle produced for meat rose by £192m, but the value of output from sheep dropped by 11% to £128m.

The value of milk production rose by 0.8% or £31m during the year, but this masked the volatility in farmgate prices and rise in input costs that prompted the SOS Dairy protests of summer 2012.

Meanwhile, arable farmers saw the value of wheat drop by £215m or 9.7% as a result of the poor weather and the value of the oilseed rape crop was down 11% because of a drop in yields. The value of the sugar beet and potato crops were also down.

NFU chief economist Phil Bicknell said: “The overall fall in farm profitability will not be a surprise for anyone in the industry. The UK recorded its second wettest year ever in 2012, and no farming sector was immune from the weather. I also expect these headline figures to hide tremendous variation between regions.”

Mr Bicknell also warned of the continuing effect of the inclement weather on farming finances.

“On top of delayed planting last autumn, crop development has been slow and spring planting is behind schedule in many parts,” he said.

“For livestock producers, the immediate concern is a lack of fodder after a long winter, which follows on from higher feed bills in 2012. We may only be four months into the year, but the pointers are for UK farming profitability to be further squeezed in 2013.”

“The weather chaos has laid bare the importance of CAP payments. With profits squeezed, a larger number of farmers will again be forced to rely on CAP’s direct payments to underpin their business in the year ahead,” he said.

“Managing risk and volatility are both key and that must be recognised by the government in its CAP negotiations and in pricing decisions taken by the food chain.”

A second estimate of the TIFF figures for the year 2012 will be issued by DEFRA in November.