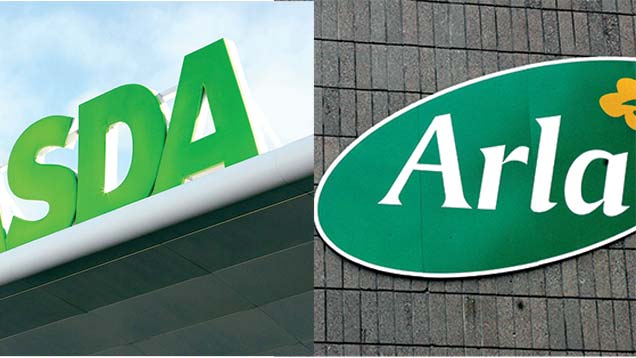 Confusion surrounds the basis of a commitment by Asda to pay Arla a milk producer price of 28p/litre for all of the liquid milk the co-op supplies to the retailer.

A statement from the NFU on Thursday evening headed “Asda moves to 28p per litre” welcomed the move as a significant leap forward in recognising the true value of British dairy products.

Despite repeated requests for clarification, the only detail Farmers Weekly has been able to from Asda on the basis of the 28p/litre price was that standard operating costs would be paid on top of this price and that these included all the costs related to getting the milk on to shelf.

Arla supplies Asda with all of its liquid milk and a wide range of Arla brands.

Under the co-op model, all Arla’s farmers receive the same price per litre, so it is expected that all 13,500 members will share any benefits equally.

The co-op said it welcomed the news that Asda was supporting its farmers at this difficult time but referred Farmers Weekly to the retailer on questions about the deal.

“We will be working with Asda on their fresh milk brand to promote the benefits of our farmer-owned marque.” The details of the deal with Asda were still being worked on and it was too early to say more, said the spokesperson.

The retailer has committed to the new price from Monday (August 17) for the “foreseeable future”, on which there is also no definition.

The ASDA deal has been leaked, please treat with http://t.co/XtO4eeYxPd at FFA we only issue statement when deal is done

NFU President Meurig Raymond said: “The NFU has been lobbying tirelessly for Asda to recognise the plight of the dairy industry so we are pleased that Asda has moved to support farmers in their hour of need.

“It is clear from Asda that this commitment is to support the UK dairy industry at a time of crisis. It is now important that Arla ensures this is delivered to British farmers on the ground, with immediate effect.

“This decision recognises that our dairy farmers need a fair price so consumers can ensure they have access to British dairy products now and in the future.”

The NFU statement included a statement attributed to an Asda spokesperson, which said: “Today, we have confirmed to our milk supplier, Arla, that we are increasing the price we pay per litre from Monday to a level that will assist our farmers during the current crisis.

“Asda’s origins are in dairy farming, which is why we are acting in the best interests of our farmers and our customers by increasing the price we pay, introducing the Farmer’s Mark label and not passing on any of the costs to customers – our retail price stays the same.”