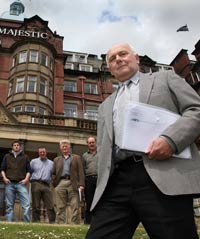 The chairman of Dairy Farmers of Britain‘s member council Stephen Yates has faced a barrage of criticism from milk producers during a meeting in Yorkshire.

About 200 dairy farmers met in Harrogate on Sunday 7 June to hear Mr Yates and Steven Oldfield of receivers PricewaterhouseCoopers. The farmers delivered a aired particular concern over some producers whose milk was failing to attract any interest from new buyers.

Martin Burtt, a former local chairman of DFoB from Glaisdale in the North Yorkshire Moors, said he, like all other suppliers to the co-op, had been angered by the total lack of communication in recent weeks.

“This situation has been getting steadily worse and no one had any idea just how bad it was.

“Although we now hear that around 900 of the 1800 co-op members have managed to secure new milk contracts, there are still many who are struggling,” said Mr Burtt, who milks 150 cows.

It emerged from the angry meeting, which also heard the receivers tell members that they would not be responsible for DFoB’s debts, that some farmers who did not have the volume of milk to offer were failing to find new buyers.

Richard Ellison, north east NFU boss, described the meeting as “extremely heated”. “In other areas producers have been managing to secure new contracts but there looks like there’ll be some farms in Yorkshire that are having problems because of volume of milk or location.

Andrew Potter milks 90 cows at Farndale in the North Yorkshire Moors and produces around 550,000 litres. He has so far not been able to secure a new milk contract despite discussions with other milk buyers.

“It’s volume and not location that’s the issue but my neighbour is an Arla Foods supplier and the tanker goes past our gate and yet we still can’t get a definite “yes” from them for a new contract.

“We aren’t alone, but those of us who are now facing a very difficult job looking for a new milk buyer really do need someone to step in and put our individual cases to the highest level within these milk companies.

“Their decisions will determine the future of these farms and these families,” said Mr Potter.