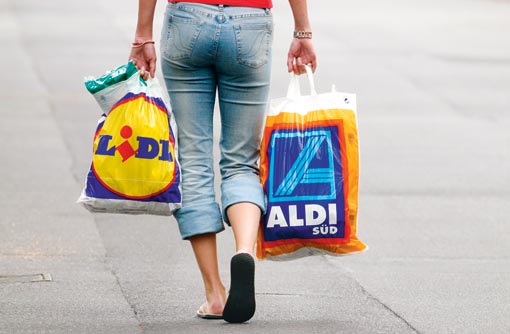 Discounters Aldi and Lidl have been on the fringe of the supermarket scene in the UK since the early 1990s, but have started to take up significant space in the past two or three years.

Analysis from researcher Kantar Worldpanel shows both discounters have increased their market share year on year, with both currently at the largest market share they have ever had in the UK.

Lidl was close behind with 3% of the grocery retail market, a rise on last year’s 2.8%.

Both discounters put part of their success down to the effect of the recession on the nation’s spending.

For decades food had been gradually getting cheaper. Then in 2006, food prices shot up. With prices continuing to rise, it appears consumers have been more willing to or have been forced to change their shopping habits.

Research supports this – a survey of 2,000 consumers last year by Which? found shoppers were more likely to buy meat from discount supermarkets during the recession.

The survey uncovered a number of other trends, including consumers being less likely to buy organic or farm-assured meat and thinking animal welfare is less important.


It shows Walmart (Asda in UK) at the top of the table, with Tesco at number four, Lidl at eight and Aldi in ninth position. Sainsbury’s holds the number 22 slot and Morrisons is 28th.

“Pressure on household budgets is undoubtedly driving some of the growth at the discounters, but messages about quality are starting to resonate,” says Edward Garner, director at Kantar Worldpanel.

“Lidl announced that it will increase its fresh meat and poultry floorspace by 50% within the year, and Aldi’s new ‘convenience’ store in Kilburn is a departure from its traditional edge-of-town offering. These changes are likely to appeal to a new and different group of shoppers, which will bolster the performance of the discounters even further.”

The discounters’ credentials for local food and for working with farmers have never been widely known. However, despite what consumers might think, a low price does not have to mean imported food or poor quality.

In a 2011 Red Tractor labelling audit, Lidl was found to have the highest proportion of its fresh products carrying the Red Tractor logo, at 80%. Currently, 100% of fresh meat and poultry is British and Red Tractor. However, when UK lamb is short, up to 25% of Lidl lamb is sourced from New Zealand.

Today, both supermarkets are keen to show their support for UK produce. Lidl is running a “Like Meat, Love Lidl” campaign, while recent TV adverts for Aldi beef focus on English and Scottish farmers.

Price is still an important part of the discounters’ appeal, but rather than compromising quality, the supermarkets say they buy local or use their European ties to ensure good value.

“We have a simple but highly effective buying strategy of sourcing our fresh products as locally as we can to ensure that we support the local economy and to keep our transport costs down, as well as sourcing from our Lidl partners across Europe,” a Lidl spokeswoman told Farmers Weekly.

“For example, our colleagues in Lidl Italy buy Parmigiano-Reggiano parmesan in vast volumes directly from source and export it to Lidl stores across Europe, ensuring that each Lidl country is able to stock an authentic, speciality product direct from source at a good price.

“Each Lidl store is then able to pass on any savings made this way back to the customer in discounted prices. In the same way, we at Lidl UK will buy British products and export many of them to other Lidl countries across Europe.”

Farmers who supply the stores report that it is a pretty straightforward process.

One fruit and veg producer who supplies Aldi and Lidl explains the difference between the discounters and the four big supermarkets.

This approach suits producers well, he says, as it allows them to shift a surplus of a particular item – when they have a crop flush, for example. Discounters allow producers to keep costs down too.

“Supplying the four big supermarkets can mean high overheads but your operating costs supplying the discounters are cheaper. You don’t have to cost in retailer-specific things like certification schemes, packaging and transport. It’s very simple, we use second-hand cardboard boxes,” says the supplier, who would rather not be named.

He believes the discounters cannot be compared directly with the big four supermarkets, as they are a different type of business more akin to wholesalers.

“You’ve only got to look round the stores to see they’re completely different. They respond to what’s seasonal or what they can get at the time. Their networks are cheap and capacities low. It’s a simple way of doing business.”

Matthew Wright’s family has been supplying Aldi with beef for about five years – around 100 head a year – and he is now the face of Aldi’s beef suppliers, featuring on its website.

Mr Wright became an Aldi supplier through selling to the local abattoir, Anglo Beef Processors in Shropshire. “I was sending cattle to ABP and they fit the Aldi spec – it was as simple as that,” he says.

“At the end of the day if you produce what they want, what suits them, then they pay fairly,” he says. But the deductions can be quite high for not meeting standards, either in specification or assurance.

The Garrioch family from Huntly, Aberdeenshire, supply beef to Lidl through Scotbeef. There is no direct contract with either the supermarket or the processor, which works well, says Sandra Garrioch.

“We don’t have a contract but a procurement officer comes and picks out the cattle they want to take,” she says.

While Aldi and Lidl are keen to emphasise their connection to farmers, they do not visit the farms they buy from, unlike larger supermarkets such as Tesco or Sainsbury’s, which have dedicated supply groups for some key products.

This may not necessarily be a negative thing, suppliers say, as supplying a third party or supplying ad hoc means farmers do not have to deal with supermarket buyers and complicated contracts, which producers often complain about.

After supplying Noble Foods for 30 years, Lincolnshire egg producer Sarah Louise Fairburn and her family decided to go it alone and start packing and selling their own eggs direct to retailers. Aldi was their first customer.

“I couldn’t recommend the supermarkets more highly,” says Ms Fairburn, who also supplies Iceland and regional branded eggs to Asda. “We expected talks to be scary but they weren’t at all. We found Aldi very similar to us – we want our bit and they want their bit. No one in the supply chain is greedy.”

LJ Fairburn now produces more than eight million eggs from its own units and has supplied Aldi since November last year.