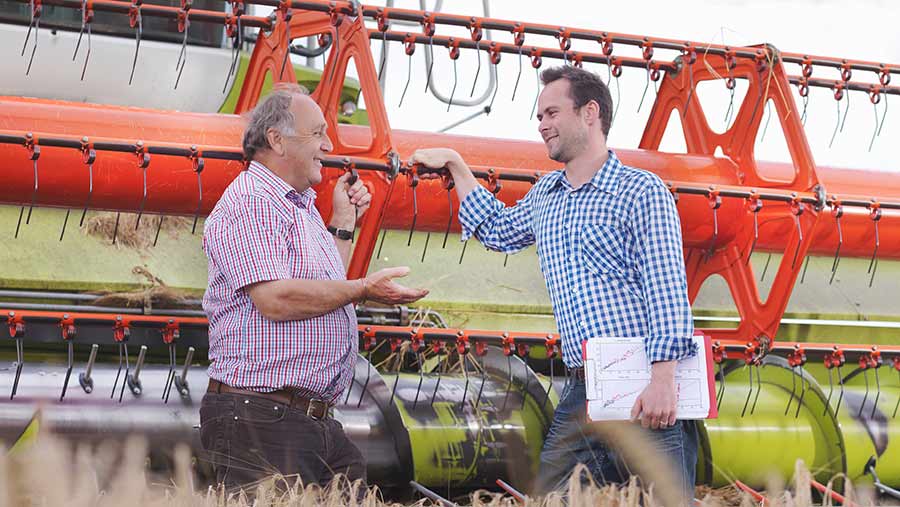 Improving performance is a must for any farm business in today’s volatile market, but doing so is often easier said than done, especially without outside help.

Employing a consultant is one option, but with tight margins it is not something all can afford to do.

Sharing ideas, problems and solutions with like-minded farmers can be a far more effective answer, requiring little more investment than your own time. It may also provide a valuable chance to socialise and build long-term business relationships.

A number of such groups operate across the UK, covering every sector. AHDB Beef and Lamb offers several initiatives to farmers in England through its Better Returns Programme, while Quality Meat Scotland (QMS) and the Scottish Agricultural College (SAC) facilitate a strong network of monitor farms, grazing groups and other discussion and benchmarking groups.

“Discussing good and bad experiences with other farmers is a great opportunity to learn from a wealth of knowledge and experience,” says SAC senior agricultural consultant Raymond Crerar. “One farmer told me it was ‘the best sort of consultancy and free advice’ he had ever had.”

Mr Crerar and other farmers taking part in such groups stress it is not about “showing off” the host farm, but using it as the stimulus to discuss issues affecting all participants.

Ideas taken away from these discussions may sometimes result in big changes to production systems, but often it is the simplest ideas that make the most noticeable difference on farm. Here three farmers share their experiences.

Tenant farmer and AHDB Better Returns Programme steering group member Mike Powley runs a successful beef and arable farm with his father Tom and wife Elizabeth near York. He feels there is always something new to learn that will drive the business forward. 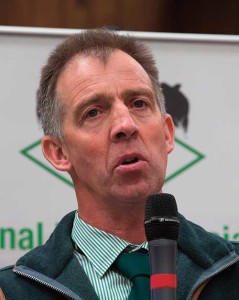 The holding was part of the first AHDB beef “progressive group” and is Asda’s development and educational beef farm. Mr Powley is also a former Farmers Weekly Awards winner and has just won Northern Farmer of the Year.

“It’s not about any one farmer being ahead of the game, but about sharing our ideas and allowing others to critique what we are doing at the same time.”

One of the biggest changes to come out of the progressive group, after a trip to another farm, was the inclusion of three years of red clover in the arable rotation, Mr Powley says.

The clover provides several benefits, including:

“If we ensile the clover properly, the silage is like rocket fuel, providing similar nutritional benefit to bought-in concentrates for half the price,” says Mr Powley. “We’re achieving 1kg/day growth from weaned heifers at minimal cost.”

The use of supplementary iodine boluses to reduce calf losses is another change that is benefiting the business. Low iodine levels were highlighted by routine blood testing and the change has resulted in more virile calves with a strong appetite and better body temperature regulation. Cows also appear to be calving earlier, with a marked reduction in the number going beyond the gestation period, notes Mr Powley.

“Higher iodine levels should also give better conception rates at service. We’re averaging 70% conception from sexed semen at the moment, but if we can push that up another 5-10%, it would make a big difference for minimal extra cost.”

Willie Harper has been a member of several beef and sheep groups over the past eight years and chaired the Clyde Monitor Farm community group.

He is still part of the Ayrshire and Renfrewshire beef and sheep group (formed out of an earlier business improvement group) and believes it offers a valuable chance to share problems, ideas, benchmarking information and socialise. The core group of 20-25 farmers meets regularly with visits to each other’s farms. 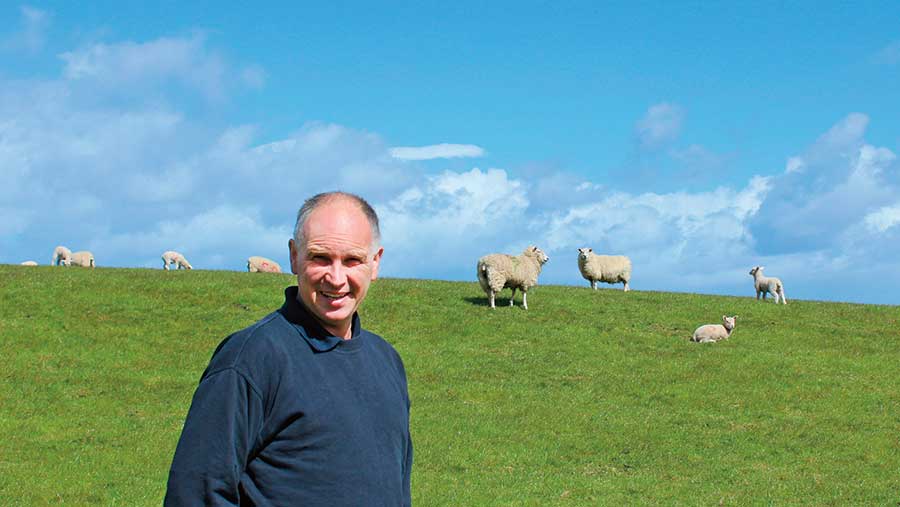 “I’ve learned something from every meeting I have been to and can’t understand why more farmers don’t take part in groups like this. We have seen some exceptional farms over the years, but it’s probably the trips to normal units similar to my own that have been most relevant.”

One significant change to Mr Harper’s business, which came from his involvement with the monitor farm project, was a switch away from larger Continental (Charolais) bulls to a criss-cross breeding system of Simmentals and Angus for his 200-cow suckler herd.

The move was a direct response to the difficulties he experienced when producing large calves from the Charolais bull, and high feed costs incurred during finishing. “High calf losses were brought up at a monitor farm meeting, where it emerged several farmers had been experiencing the same thing, so we set about finding a solution.

“The Simmentals give us the growth and milk, while Angus cattle offer much better natural fleshing off forage and grass.”

Mr Harper aims to run sucklers at 550-600kg liveweight, with their offspring producing finished cattle with a carcass weight of 350-370kg.

“Buyers don’t want heavier 400kg carcasses any more, so there’s no point spending money producing that. We have seen a big benefit from using more maternal, easy-fleshing cows that are easier to calve and finish at lower weights.”

The farm is also two years into establishing a self-contained breeding sheep flock of pure Lleyns after seeing a successful low-cost enterprise being run at the monitor farm. “We started with 30 sheep bought from a local flock and lambed 115 ewes this year.”

Rotational grazing has been introduced on some land to maximise grassland productivity and keep costs down.

“The cheapest feed we have is grass, so we need to make the most of it. The land we farm is very spread out, so isn’t ideal for rotational grazing, but we try it where we can by sub-dividing large fields.

“We haven’t quantified the benefits yet, but can winter the sheep flock without any concentrates and use the young grass to make haylage to give the ewes a boost around lambing. It is a very low-cost system.”

Following advice from other farmers, regular soil sampling is also now done across the 80ha of arable land, used for growing winter and spring cereals. “We usually apply muck before ploughing cereal ground and have seen a saving on phosphate and potash by soil sampling each year and applying the manure more effectively.”

Being a member of the first AHDB progressive sheep group resulted in a number of changes at the 270ha Chawton Park Farm, says Ian Robertson.

The farm’s flock of 1,400 home-bred Lleyn ewes remains outside all year to minimise costs and help manage grazing around the 240 red deer. Most of the flock is now lambed outside in May, with lambs typically sold as 30kg+ stores in the autumn. 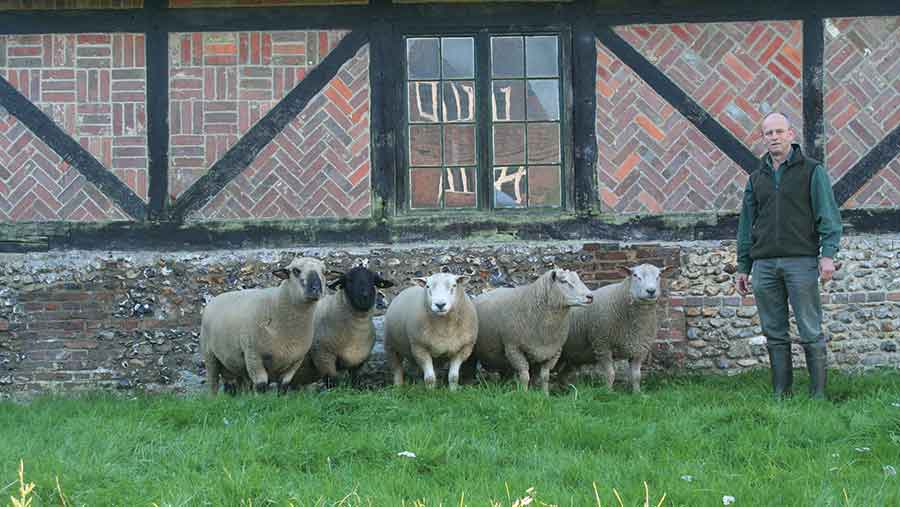 Average lambing percentage (from scanning) has increased from 154% to 170% over the past six years, due to a number of improvements.

“I try to keep the system as simple as possible with good record keeping, both physical and financial, to enable it to be analysed over time,” says Mr Robertson. “A lot of the ideas we’re trying have come out of discussions within the [AHDB] group.”

Grassland regeneration is a key priority and one of the most recent changes is the undersowing of 16ha of a red clover/grass ley into spring barley this year. The barley will be taken off as wholecrop silage for the deer, while the clover will be used to finish lambs and provide higher-quality conserved forage.

Mr Robertson believes the additional cost of establishing the ley will be more than offset by the feed value.

The farm is also in the process of regenerating 72ha of ploughable grassland previously in the Higher Level Stewardship scheme.

Ultimately Mr Robertson believes providing higher-quality forage will help ewes retain condition better, boost the number of lambs reared per 100 ewes from 155 to 160 and increase average growth rates from 220g/day to 300g/day. This should increase the overall lamb output a hectare from 480kg to 650kg liveweight/ha.

Other measures to raise the lambing percentage include the introduction of teaser rams to tighten the lambing period. The measure was first tried three years ago on shearlings experiencing low conception rates and has just been extended to ewe lambs.

Mr Robertson also tried lambing shearlings indoors in March to boost lambing percentage. Although it improved performance, this year he has reverted back to lambing shearlings in May with the rest of the flock, as the cost and stress of lambing twice outweighed the extra lambs produced.

A post-mortem is also now carried out on any dead animals, with pictures taken to help identify the exact cause and avoid a repeated incidence.