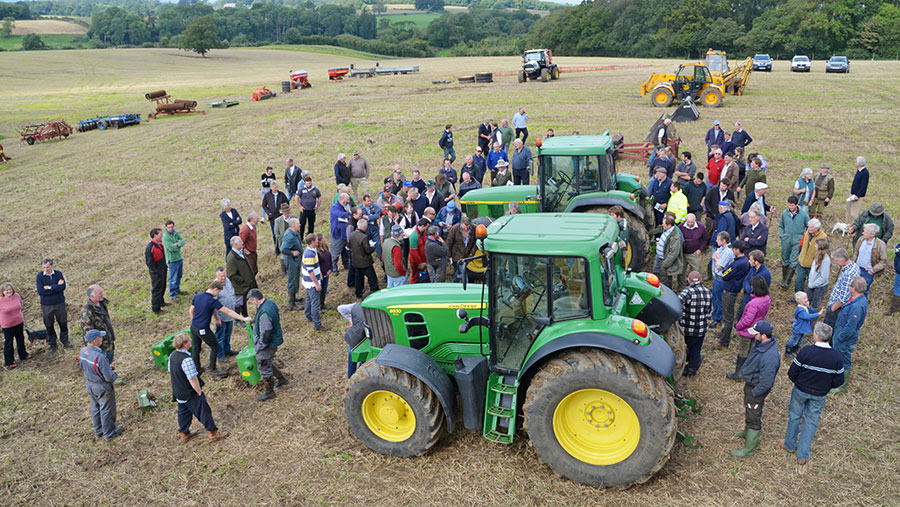 Auctioneers are reporting an upsurge in the number of on-farm machinery sales, with more farmers restructuring their businesses as a result of changes in farming policy.

Low commodity prices, uncertainty over Brexit and the desire of some farmers to “take their lives back” are among the factors driving sales of machinery and equipment.

Some are clearing the decks before entering into a contract farming agreement, enabling them to step away from the day-to-day pressures of farming.

See also: A beginner’s guide to starting a joint venture in farming

Others are getting rid of surplus kit in a bid to secure economies of scale by pooling machinery and labour as part of a joint venture with neighbouring businesses.

Forty percent were for farmers looking to change their farming policy, 20% were where farms were being sold or let and another 20% were down to farmers retiring. The remainder were due to the cessation of the business or ill health.

“Prolonged periods of low commodity prices combined with the vast growth of agribusinesses and large contracting outfits swallowing up work has led to retirement plans increasingly being brought forward by farmers across the UK which has directly increased the volume of on farm sales,” said Mr Godfrey.

“It can be a very difficult decision to make, but the fact the machinery trade is so strong at the moment is perhaps helping people come to that decision.

“The second-hand machinery trade has never been so good. Some makes and models of tractor were selling for more at the end of last year than they were at the start of the year.”

Mr Godfrey said he had taken calls about another five on-farm dispersal sales during the first week in January alone.

“On-farm sales offer the opportunity for a completely clean slate for many farmers and landowners and we forecast the numbers of these to increase across 2018 as Brexit negotiations create further uncertainty within the industry.”

Simon Wearmouth, a partner with Brown & Co, agreed there had been a spike in machinery disposals over the past 12 months as farmers increasingly looked at joint venture options.

The most common approach was to enter into a contract farming arrangement, but some were looking at pooling machinery.

“I have done a big valuation recently for two large farming businesses who are pooling their farming assets and creating a farming company to farm both of their farms. So it is definitely happening,” he said.

Stuart Long, head of farm sales for Howkins and Harrison, said 2017 had been a very busy year for farm sales and, while there were a range of reasons for this happening, restructuring was becoming a more common explanation.

It was 300-500 acre farms that were most often looking at opportunities to restructure, he added.

Buyers are reassured by the fact they can see where the machine is from and know it is genuine.
Oliver Godfrey, Cheffins

Presentation is critical
A lot of farmers will drag machines out of the nettles and think that’s the job done. But if you want the best possible sale then present machines in the right way and show you have looked after them.
Alastair Brown, Bletsoes

Online option
For smaller amounts of kit, consider entering it into an online auction as there are no haulage costs and the auctioneer often bears the cost of advertising.

The main cost for the vendor is providing some decent photographs of the equipment.
Simon Wearmouth, Brown & Co

Promote appropriately
If advertising a machinery sale, think about how it is presented. For example, a sale advertised as a “complete sale” tends to draw a different crowd as people read into the situation that there is not likely to be any reserves and the vendor is in the market to sell.
Stuart Long, Howkins and Harrison

Peter Griffiths, tax director for accountants Hazlewoods, warned that farmers need to be alert to the tax liability they face before machinery is sold, or transferred across to another business if setting up a shared contracting business.

If the annual investment allowance (AIA) was used at the time of purchase, then it likely that most machinery received a 100% tax deduction in the year of acquisition.

“However, this will then mean when the machinery is disposed of, it is likely that there is a tax liability arising as the proceeds received will exceed what is known as the tax written down value, which is likely to be nil.”

Other tax considerations include making sure any contract farming arrangements are structured and implemented correctly to ensure the landowner remains eligible for agricultural property relief (APR) and business property relief (BPR) in relation to inheritance tax.

For example, APR is only potentially available on a farmhouse if land is farmed in-hand or under a contract/share farming arrangement, or grazing licence. It is therefore important precautions are taken so that HMRC cannot interpret any part of a contract farming arrangement as looking more like a tenancy.