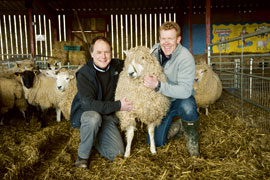 Diversification was the farming trendword of this century’s first decade, when farmers were told, not for the first time, to “diversify for profit” as returns from crops and livestock were slim at best and, for many, non-existent.

You don’t have to look far to see the breadth of imagination in British agriculture, as everything from maize mazes to open farms and childrens’ activity centres, not to mention farm shops, ice-cream makers and cheesemakers sprang up. Others saw opportunities to develop redundant farm buildings, or to put the farmer’s practical hands-on skills to work in other jobs, like fencing, marquee firms, or office furniture assembly.

For a lot of farm businesses, a successful diversification became the lifeline, propping up struggling or even failing farming operations. For others the diversified enterprise took over, quickly becoming the most successful, dominant enterprise with the best prospects for growth. In all cases, it helped to make the farming business more sustainable.

Our series of articles with Gloucestershire farmer and television presenter Adam Henson is exploring what this decade’s favourite buzzword – sustainability – means for farming businesses. So far we’ve looked at what environmental sustainability really means, and questioned whether existing stewardship vehicles and practices – like the agri-environment schemes open to farmers – really deliver against a sustainable farming agenda.


We’ve looked at modern arable practices and questioned how sustainable our reliance on shorter rotations and a shrinking agrochemical armoury really is. And we’ve struggled to balance this with the need for financial sustainability – particularly with more volatile commodities markets and substantially higher prices for cereals.

Now we’re looking at diversification, and how it’s proved the key factor in sustaining many farming businesses in the last few years. Adam Henson’s Cotswold Farm Park is a case in point. It sees up to 80,000 people through its gates each year, and celebrates its 40th anniversary this year having welcomed nearly three million visitors since 1971.

It goes without saying that the Cotswold Farm Park forms the major part of Adam and Duncan’s diversified business. Established by Adam’s father Joe and his business partner John Neave, the Cotswold Farm Park quickly became one of the most successful of its kind and there are now 1,200 similar enterprises in the UK.

The collection includes Gloucester and White Park cattle and traditional oxen, ancient Bagot goats, said to have been brought back from the crusades by Richard the Lionheart. There are some even older species like Iron Age pigs and ancient Soay sheep, not to mention horses, ponies, poultry and waterfowl.

It all began after Joe Henson realised he needed to diversify his mainly arable farming business, having taken over the tenancy at Bemborough Farm in 1962. “We’re carrying on Dad’s work and passion and showing it to the general public – and that’s really satisfying,” Adam says.

Joe’s interest in rare breeds began with a few Cotswold sheep, and built steadily, although for the first few years it remained a hobby. He began to acquire examples of livestock breeds that were becoming less mainstream in the late 1960s. The post-war intensification of farming to feed a hungry, near-bankrupt nation saw the introduction of black-and-white dairy cows and Continental beef breeds. Older breeds that didn’t suit these systems began to fall from favour.

“For instance, Gloucester cattle, which traditionally had a threefold purpose – meat, milk and draught power – began to slip away,” says Adam.

Joe’s hobby received a real shot in the arm when, in 1970, Whipsnade Zoo at Woburn in Bedfordshire decided to concentrate on more exotic wild animals from abroad, and offered Joe its collection of rare and native farm animals. The Cotswold Farm Park opened its doors a year later.


Despite local opposition – including the belief that “farms were factories, not visitor attractions” and that “the Cotswolds won’t get tourists”, the farm park was an early success.

As more traditional animals, like the Gloucester Old Spot pig, were gradually left behind by commercial pig producers, Joe was approached to join a working party of farmers interested in preserving some of these breeds. It was this group that became the Rare Breeds Survival Trust, with Joe as its founder chairman.

“It’s not just sustainable in that sense – the Farm Park has been a really important part of our business, and one that we’ve relied on, when farm incomes have been lowest,” says Adam.

“For me, sustainability is intrinsic to all aspects of our business. It’s all about ensuring the continuation and well-being of everything we do, our technical efficiency, our environmental obligations and our relationships with the people we interact with.”

The founding partners began with an investment of £125,000 – equivalent to about a quarter of a million pounds today. Most of this went into converting old Cotswold stone buildings and providing the infratsucture for the displays. When Duncan Andrews joined the business in 2000, he and Adam made a further investment to refurbish the play equipment, kitchen and restaurant, and improve the interactive visitor experience.

“With the addition of the caravan park and campsite, we had to build ablutions facilities, an office and shop. And in general repairs and improvements we find we need to re-invest between £50,000 and £70,000 a year,” says Duncan.

The Cotswold Farm Park now generates a significant turnover with visitors spending between £9 and £10 a head. Other income streams add to this, including livestock sales worth about £100,000 last year.

Part of the Farm Park has received a makeover this year. As well as giving parents and children a chance to watch shearers at work or see a cow being milked, Adam and his business partner Duncan Andrews have decided to put as much information about their commercial farming operations in front of the public as possible.

A new information zone explains what crops farmers grow and why they apply sprays, what big tractors are doing in fields and how many thousands of tonnes of food farmers produce each year.

“We felt we were missing a trick and we want to develop a ‘power zone’, explaining how satellite navigation, variable-rate fertiliser and yield-mapping on the combine contribute to modern, efficient food production,” Adam says.

* If you know of a unique and successful farm diversification that deserves recognition don’t forget you can nominate then in the Farmers Weekly Awards. Entries have now closed for the 2011 awards, but profiles of the three finalists will be featured in Farmers Weekly this summer, with the winner announced at the Farmers Weekly Awards night in London on 7 October. To find out more, and meet the judges, visit www.farmersweeklyawards.co.uk

Sustainability? What’s all this then?

This series of articles with Adam Henson/ we’re trying to explore just what that familiar buzzword “sustainability” means when it gets mud on its boots. So far, we’ve looked at what true environmental sustainability means, questioned how sustainable many modern arable farming systems are, and looked at how diversification has made businesses more sustainable too.