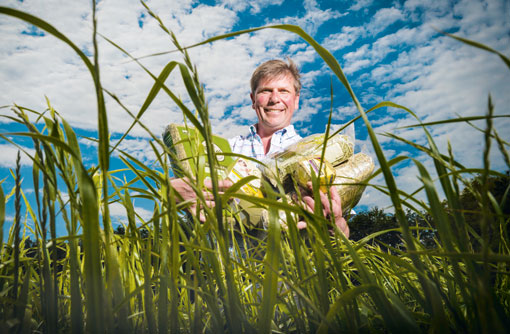 Three very different ventures challenged the judges visiting our finalists for the 2012 Farmers Weekly Diversification Farmer of the Year Award. However, what those businesses share includes enthusiasm, determination and the ability to successfully pursue projects which have moved their businesses forward in very challenging times. Johann Tasker reports on what on what one of those shortlisted for the title, Ian Burrows, is doing to make his business stand out.

Ian Burrows has secured a future for his family’s 105ha (260-acre) arable farm by developing an innovative product and business supplying high quality Timothy grass hay to the pet market.

Newhay Feeds Limited is a family-owned farming business run by Mr Burrows and his wife Helen at West End Farm, Woodhall, near Selby, North Yorkshire. Annual turnover has increased from £30,000 to more than £750,000 since diversifying in 2006.

“At the time, stables at Newmarket were importing Timothy hay from Canada. I was struck by what a top quality product it was – and how meticulous the racing industry was in making sure their horses were fed only the best quality feed.”

Quickly realising it would be difficult to compete in a market already supplied by a number of big players, Mr Burrows decided instead to apply the quality-control lessons he had learned from the equine industry to another niche – the pet market for small herbivores.

He faced a number of challenges – not least how to produce consistently high-quality hay in the UK’s inclement climate. And he commissioned market research – the results of which showed that consumers preferred pet rabbits and guinea pigs to be fed on green hay, rather than brown.

“It was never a matter of trying to add on a quick new revenue stream. We wanted to reinvent our core farming business – so much so that what we do now makes up the whole business. It was harder this way but has ensured we’ve thrived, not just survived.”
Ian Burrows

With a background in the textile industry, Mr Burrows used shirley drums rather than cyclones to extract dust and spores, developing an entire process enabling him to produce long-fibred Timothy hay that stayed green and matched the demands of his customers exactly.

Traditional crops in the area include wheat, barley and peas, rather than hay. And whereas most UK grass is grown for protein, Timothy is more palatable with a higher fibre content “I’m a firm believer that if you want the best crop, you should use the best land.”

It was a steep learning curve. “Shops were selling what I call brown hay made by manufacturers not farmers,” explains Mr Burrows. “But we have taken a scientific approach to a natural product and now have six products on the shelves that didn’t exist six years ago.”

Consumers needed educating too. Confusion over hay usage meant some were using it for bedding, while others were using it for feeding. Many consumers didn’t even known that hay should form a majority of a rabbit’s diet.

“Rabbit food is generally considered to be muesli, crunch and nuggets. Although hay should provide the majority of a herbivore’s diet, it is often considered to be a secondary or supplementary feed by owners.”

Feed manufacturer Burgess Pet Care is a key partner. Everything is sold and marketed through Burgess – including to national retailer Pets At Home, which was won over when Mr Burrows hosted an open day for them in a gazebo on one of his hay fields.

“We’ve worked really hard,” he says. “There have been difficult times and it has required a big leap of faith. The business has already changed beyond all recognition but we are continuing to develop new products and we’re intent on growing the company.”

Those new products include the Complete Food Cube – a compressed cube of hay with added vitamins and nutrients that provides 100% of a herbivore diet. It offers up to seven days total feed – all in a box that takes up much less space than a bag of hay and pellets.

“It was never a matter of trying to add on a quick new revenue stream. We wanted to reinvent our core farming business – so much so that what we do now makes up the whole business. It was harder this way but has ensured we’ve thrived, not just survived.”

“It’s always important that we all look for fresh opportunities to grow our businesses and maximise the use of our resources, which is why Firestone is championing this award. The Diversification award recognises innovation and achievement – and applaudds farmers who find new ways to make profits.”
Barry Coleman, Firestone