Diversification can help to make the most of assets and improve cashflow. One farming family near Newcastle has achieved just this.

Shaun Watson makes the most of every asset to bolster his farming enterprise.

Alongside his father, Philip, and brother, Anthony, he has taken a predominantly arable estate and built a business that uses haylage as a break crop, running a horse livery alongside.

The brothers, based at Holywell Farms in Whitley Bay, are sixth generation tenants of the Duke of Northumberland, with whom they enjoy a very good relationship – something that helps to make their business enterprise feasible. “We tenant about 324ha, contract farm 202ha and own a further 61ha,” says Shaun. 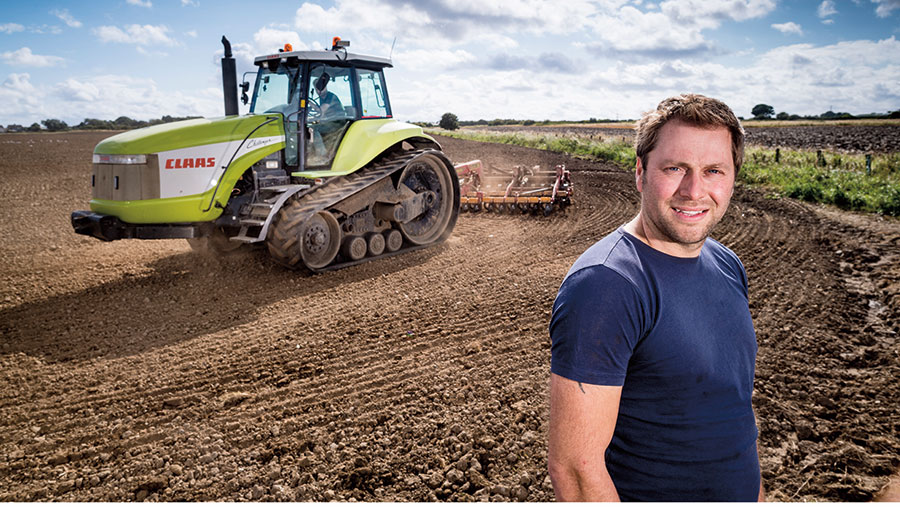 The brothers farm 728ha: 202ha of which is wheat; around 81ha each of barley and oilseed rape; 40ha of oats; 28ha of winter beans; and the rest is ryegrass for haylage.

They work on a two-year grass ley, then wheat – depending on the land – and a second wheat or barley.

“We have also tried a third wheat on good ground after grass, which has been quite successful,” explains Shaun. “We try not to grow many oats as ryegrass is a better break crop, and mainly aim for first wheats to keep the farm clean.” As soon as the grass looks tired, usually after two years, they will take it out.

Philip got involved with making haylage more than 20 years ago, when veterinary focus was directed at tackling horse coughs from eating hay.

“Vets realised that dampening the hay could stop horses from coughing and we have since become rather specialised in making quality haylage,” explains Shaun.

At the time, the farm was host to a 15-horse livery, but that has now grown to house 115 horses, while the haylage business supplies between 2,500 and 3,000 horses a week.

“Horses seem to be the new craze. Everyone seems to have one, so though we started small, we thought we would try something new with the livery and haylage, and it has just boomed,” he adds.

“It is a really good enterprise and fits in perfectly with the arable – especially for planting early or first wheats.” 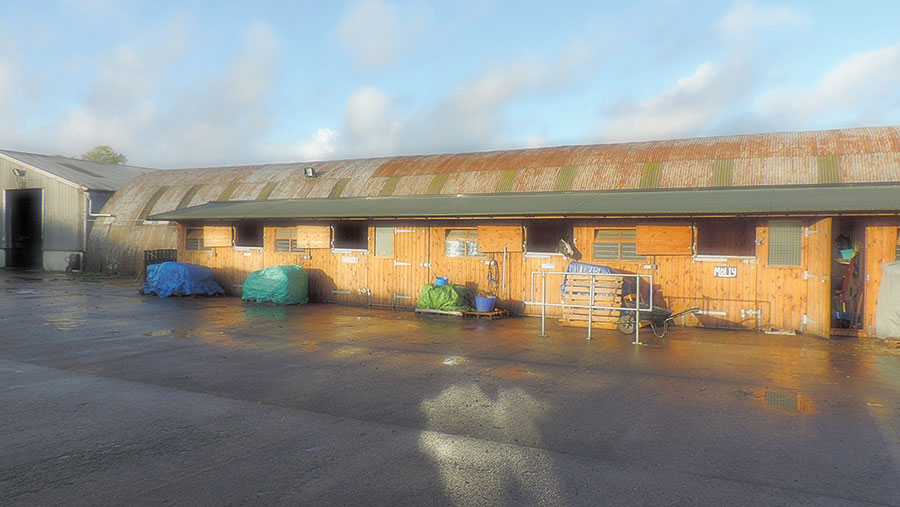 The diversification runs alongside the arable as a continually profitable side, so when wheat prices drop below £130/t, the haylage always stacks up and when wheat hits £150/t it is the same price as haylage, explains Shaun.

“It is also a good break crop – it means we can get the wheat in early and results in yields of 12-13t/ha.” The haylage business means that the farm hardly has a piece of machinery that is over four years old, and they are often able to buy new.

However, Shaun is extremely cautious over biosecurity as he is fearful of getting blackgrass on the farm. This means that the family will not bring in contractors, but do all the work themselves.

They also only use organic matter produced by horses that have been fed on their haylage, so they know exactly what is coming back onto the farm. “We sell straw and haylage and then charge to remove the muck, which we use as organic matter.”

The haylage and livery have such a good reputation that Shaun hardly needs to advertise at all – though he does have a website and a Facebook page, which generate some orders. “We sometimes sponsor a horse show but it is mainly through word of mouth.”

Getting the right people

Shaun and his brother are equally involved in the arable, livery and haylage parts of the business, while Shaun’s wife, Laura, and mum, Linda, look after the farm accounts and the livery.

To deliver the massive amount of haylage to customers, the business has two vans that are on the road seven days a week managed by two full-time college graduates.

“It is nice to employ young lads out of college and it gives us some breathing space to focus on the arable work,” says Shaun.

“I find if you want good staff, you have to give them a full-time job. We try to employ the younger ones who need a chance as there are less farms around and fewer jobs available.”

Orders often come in when a customer has run out of haylage, so it is important to be able to deliver quickly. “We have to have our finger on the pulse to make sure that customers are not waiting.” 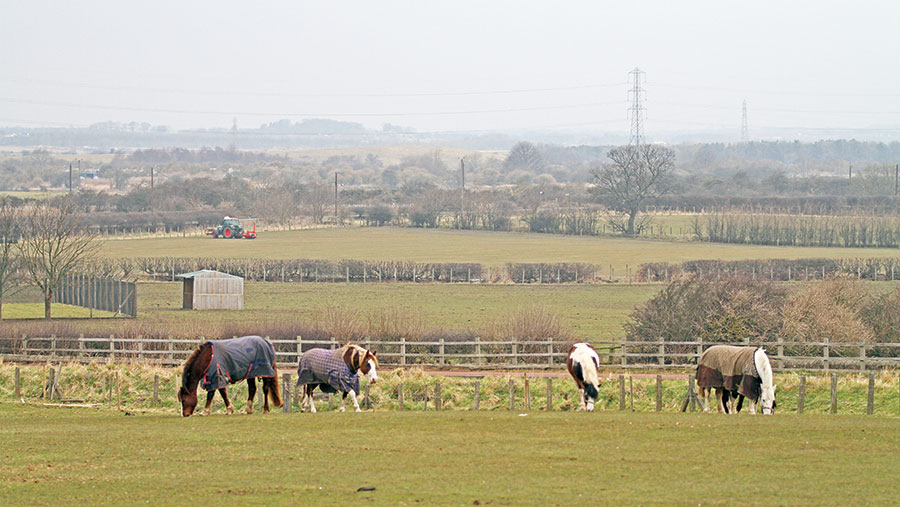 The business is continually evolving and Shaun is now heading back towards mixed farming.

“Last year, rightly or wrongly, we decided to buy 12 pregnant Belgian Blue cattle to feed the waste haylage to.

“We have since bought 12 Aberdeen Anguses and six Belted Galloways,” he adds. “I feel like we need to have a mixed farm – we had specialised but are now moving back to mixed for the organic matter and cashflow.”

The cattle will make use of buildings on the farm and any spare silage. “We take two main cuts of haylage, but the third cut is not as good and so goes as silage – it all helps tidy up the farm,” says Shaun.

“We are putting up a new 100x50ft shed for spring calving the cattle to make life easier.” The family had no previous experience with cattle, and learned how to calve down through watching YouTube tutorials. They plan to keep all replacements as it is the most cost-effective option.

Diversifying is all about keeping money coming into the farm. “Wheat is a hard commodity, as you can do the best job possible, but you do not know what price you will get when you come to sell it,” says Shaun.

However, it’s taken 20 years to reach the stage it’s at now. “Diversification is not a quick fix – it has taken a lot of hard work and dedication.”

The livery did need planning to extend and we had to jump through hoops. Previously the livery was at Moor Edge Farm, but it was sold for development and we took on Church Farm. A

s an ex-engineering yard for a coal pit, it had 2ha of concreted area and huge buildings, so it was a green light to expand our stables inside. It was a good move for us as it is surrounded by 49ha of grazing.

Are any special qualifications, licences or permissions needed (other than planning)?

No, as we are not offering any teaching and do not provide a service.

What is the market like in your area – is there much competition and how do you compete?

The livery is in such a built-up area that we never have a problem getting customers. We do try to market ourselves as a luxury yard, with a tea room and immaculate facilities.

What was the most challenging aspect of setting up and running the business?

The VAT and the weather. I have to be able to make a high-quality product for my customers.

What are the main risks in this type of business?

The risks are low as I know my customers will buy the haylage before it is made but the biggest risk could be losing my reputation.

What has most surprised you about this venture?

I am surprised by how popular it is, but this is down to where we are, with so many residential areas around the farm. Further out in the countryside it would not work.

What key advice would you give to someone else considering diversifying their farming business?

You cannot plan enough or work hard enough. It has to be 110% all of the time and whatever we do has to work with the arable, as that is our core.