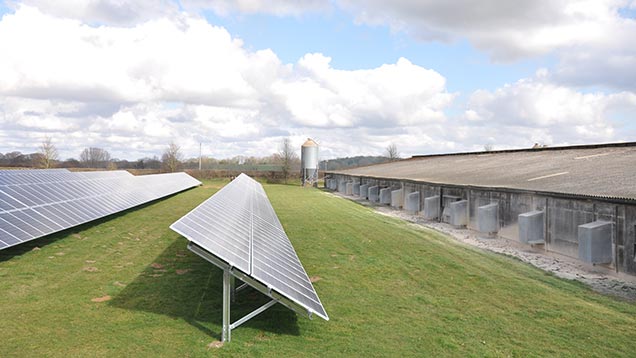 About 10,000 solar PV panels are being installed on 11 Bernard Matthews’ turkey farms as the firm seeks to capitalise on the financial opportunities of green energy, while reducing its carbon footprint.

The solar project forms part of Bernard Matthews’ so-called Big Green Plan and follows on from the creation of a 22ha solar farm in Suffolk, generating 10.1MW of electricity.

The turkey producer aims to be 100% self-sufficient in renewable electricity by the end of 2016, and carbon neutral by 2020.

In total, the latest round of solar installations on turkey farms will generate an additional 2.5MW, accounting for up to 50% of each site’s electricity demand.

The first installation was completed in late March by local firm RenEnergy and has seen a 30% reduction in the use of grid electricity, with the site operating self-sufficiently for significant periods of the day.

The ground-mounted frames have been designed by local firm Hi-Span, while RenEnergy has been working in conjunction with a London-based funder to deliver the project.

“The technical challenges we have encountered are no different than any number of agricultural projects we have completed in the past,” said RenEnergy managing director Damian Baker. “But operationally, working around the critical timetables of numerous active poultry farms has been tough.”

The solar project compliments other “green initiatives” from Bernard Matthews, including the roll-out of 209 biomass boilers across 30 farms last year, and the installation of nine wind turbines on three farms, each generating 2.3MW of energy.

The firm has drawn on more than £100m of outside money, from investors keen to share in the rewards from government-backed green energy schemes.