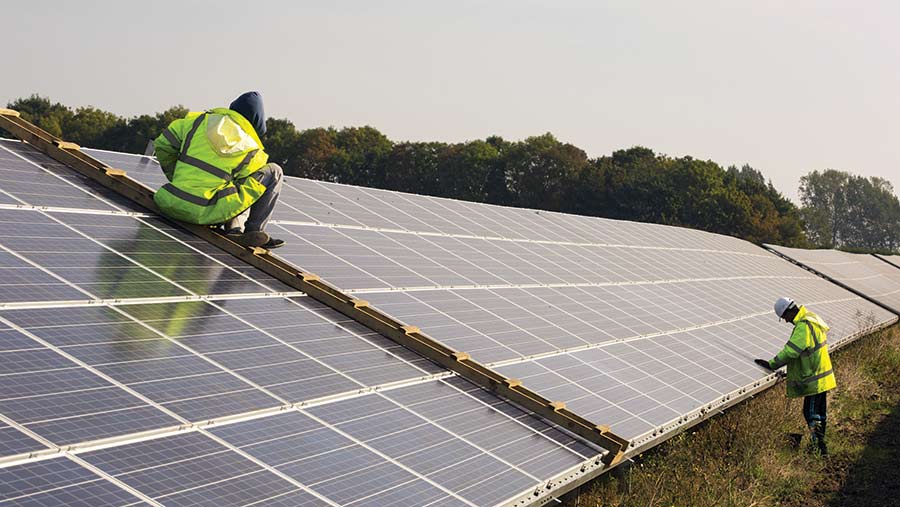 Development of new large-scale solar projects is increasing again after virtually stalling when the government axed the main support mechanism three years ago.

When the government announced the end of Renewables Obligation support in 2015, projects slowed for next 18 months but activity is starting to increase.

The ability of some solar operators to secure power purchase agreements with large corporate organisations such as Amazon and Google, which have committed to using 100% renewable energy, has also helped the sector, with the first schemes to be built in 2019..

So how should farmers and landowners decide whether letting land to developers for solar projects makes sense for them?

Many of the sites developed prior to support ending were in the 10-20MW capacity range due to the subsidy available.

Development is now focused on schemes larger than 20MW, which are able to benefit from greater economies of scale.

Typically 1MW of installed capacity requires about 2ha of land, and many new sites need at least 40ha, depending on the project design.

What makes a suitable site?

Aside from the need for available capacity on the local electricity network, proximity to a suitable power supply, typically a 33kV distribution line or substation, is one of the main criteria for solar farm sites, says Fisher German’s Mark Newton.

Smaller 11kV lines are usually unable to handle larger capacity, while 132kV transmission lines (carried on steel pylons) are too big to connect into.

“Ideally, sites need to be reasonably close to a suitable connection, although the maximum distance varies depending on the project.

Also, it’s best if connections don’t need to cross third-party land, as this can complicate matters and add cost.”

Sites should be flat or on a south-facing slope and reasonably secluded from residential areas, he says.

Where grid capacity is available, it may be necessary to act quickly, says Roadnight Taylor chief executive Hugh Taylor.

“If there is capacity on your part of the network it will only be enough for one scheme. If you’ve got a good site you need to secure that capacity for yourself before someone gets in first.”

But to get the best deal, it is vital to act independently from a developer, seek professional advice and retain control of the site until full terms have been agreed.

“Do not sign away your grid connection with anyone until you’ve taken advice and agreed the terms of any deal,” advises Strutt & Parker’s Alexander Creed.

What returns can be expected?

At the height of the solar boom in 2015, rents of £1,150-£1,400/acre with an additional payment linked to the turnover from the site were possible, but recently developers are being more “opportunistic”, says George Paton of WebbPaton.

Offers of nearer £600-£750/acre are more common as developers try to secure sites as cheaply as possible.

“But we think good solar sites can still be worth £900-£1,000/acre. If there is to be any battery storage added as well, this should get an additional amount.”

An additional payment to the landowner and linked to site revenue (typically a few percent) is possible, although some developers may resist it.

Rental income is typically inflation-linked, with many developers looking to secure agreements of up to 30 years, or potentially longer, he notes.

Developers may want rights to install battery storage alongside the solar array, either from the outset, or at a later date.

This should be factored into discussions about rental payments and decommissioning, he says.

Mr Creed says it is also worth checking exactly what area is being rented, as security fences may be set back around 10m from field boundaries, leaving a narrow strip around the edge of the field, which is uneconomical to crop, but could suit grazing or stewardship margins.

What else should I consider?

Aside from the likely returns and whether the development is right for the business long-term, there are many other issues to consider, including:

What are the tax implications?

Renting land for a solar farm is a commercial lease and is not an agricultural use, so Agricultural Property Relief from inheritance tax may be lost.

Transferring ownership of the land to another individual or trading entity before any development starts may be worth considering, to minimise the tax implications, but seek professional advice.

Business Property Relief from IHT may still be available, providing rental income forms only a small part of the total farm business income.

Because rental income is property income rather than farm trading income, it is also likely to give rise to an income or corporation tax liability.

Know who you are dealing with

There are three main types of solar “developer”, and it is crucial to know who you are dealing with, says Mr Creed: