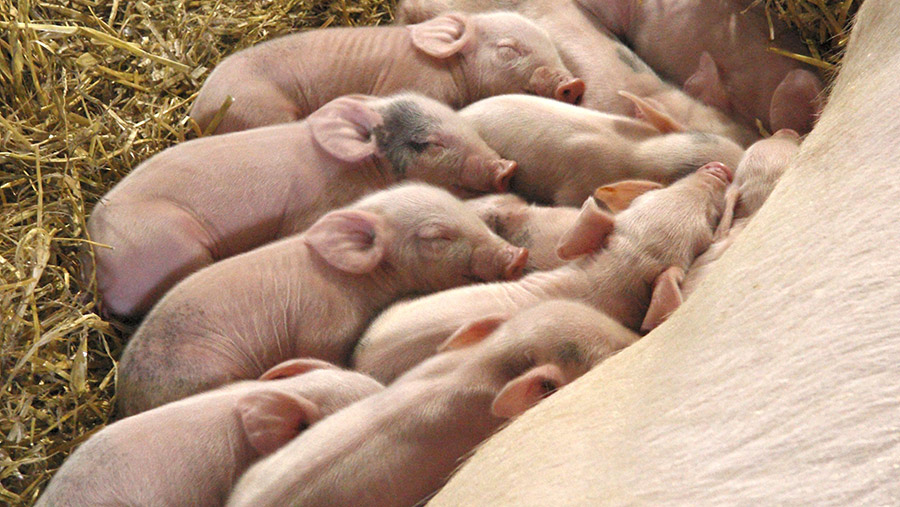 In most indoor pig units the three biggest energy consumers are heating, lighting and ventilation, so it is these areas that offer greatest scope for efficiency savings.

Measuring, recording and benchmarking energy use across the business is the first step in improving efficiency, which is often expressed on a kWh per pig or per kg liveweight basis.

Research (see table below) shows the best producers use half to one-third of the energy per pig produced that a typical unit uses, although savings vary significantly depending on the type and age of the system.

“A lot boils down to management, which is the most important aspect of energy efficiency,” says Nigel Penlington of Bpex.

Pig productivity is particularly sensitive to temperature fluctuations, so Mr Penlington says it is vital to minimise uncontrolled heat loss to save money and improve output.

“Generally, 18-20C is the optimum temperature for finishers, while piglets need to be kept within two degrees of their 28C optimum.”

Relatively cheap and simple measures such as sealing gaps around doors, walls or under slats and ensuring insulation is dry and in good condition, can dramatically improve heating efficiency and potentially halve the energy consumed per pig, according to the Carbon Trust.

But, says Mr Penlington, the effectiveness of adding more insulation depends on the type of material and building, so doubling the thickness does not necessarily double the insulation value.

A portable USB temperature/relative humidity sensor and data logger is a cheap, effective way of recording variations within the building, while a thermal imaging survey gives a more accurate indication of heat losses, he says.

“Care needs to be taken when interpreting results as sows/finishing pigs can easily produce more than 0.5kW of heat that will reflect off surfaces.

Bpex offers such a thermal imaging service to levy payers in England.

Energy use per pig produced

Heating and ventilation efficiency are closely linked, so it is again important to ensure air flow can be properly controlled without influence from draughts or leaks, says Mr Penlington.

“If ventilation is not working at 100%, just a short interval where things are wrong can have a detrimental on pig behaviour that is hard to remedy.”

Poor ventilation system maintenance is a continuing problem on many units, so it is vital to service fans regularly and keep louvres and other vents clean and free from obstruction. Outlet fans can be made up to 10-15% more efficient by adding cones, the Carbon Trust says.

It may also be worth considering misting systems which use a fine water mist to help cool buildings. “These systems don’t use much water and providing they are set up correctly, can let you reduce ventilation rates as you’re not trying to remove a lot of hot air.”

Good lighting should be a priority on any unit, says Mr Penlington, who highlights LEDs as of particular benefit.

Many Danish producers are installing LEDs and the technology is increasing in UK systems. Capital cost is high, but energy savings of 80-90% over conventional lighting are possible, as well as potential health and productivity benefits, he says.

Research outlined at a Bpex Innovation conference by marine biologist Paul West suggests LED lighting could “revolutionise animal lighting”, due to high efficiency and ability to produce a range of light wavelengths.

Studies show blue wavelengths are particularly effective at influencing biological rhythms in pigs and spectral control of light has great potential to improve welfare and productivity, he says.

A further area to consider is fitting variable speed pumps to wet feed and waste equipment that doesn’t undergo uniform use or demand. The Carbon Trust says this can cut costs by 30-50%.