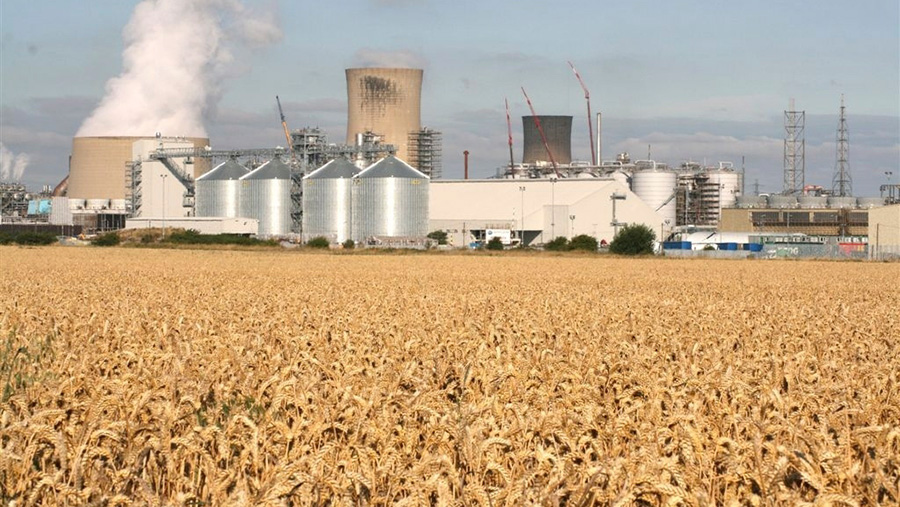 PR photo, free to use

The Ensus biofuel plant on Teesside is to re-open for a trial period in July at the latest.

However, its German owner CropEnergies warns that a permanent re-opening depends on the UK government increasing the proportion of biofuel used in total road fuel to 10% as soon as possible.

The trial could provide a boost for ex-farm wheat prices in the North East, where premiums reached £10/t in the past in the Wilton plant’s catchment area.

Production there stopped in February 2015, with technical modifications being done in the interim to improve reliability and energy efficiency.

About 80 of the plant’s 100 staff have been kept on through this time.

The company would not be drawn on how much wheat would be needed for the trial, nor how long it would last, but the size of the plant means that even at 50% wheat use, the requirement will make a sizeable dent in old crop carryover stocks.

Commercial director Grant Pearson said that Ensus would continue to use predominantly wheat.

CropEnergies has called on the UK government for early adoption of higher biofuel through “E10”. This is a requirement of the EU Renewable Energy Directive (RED), which requires that 10% of the energy from transport fuels (by volume) should come from renewable sources by 2020.

The UK is at about 4.75%, although that overstates the position because of the way that the count is conducted, with used cooking oil being double-counted because it is a waste product.

“An early increase in the renewable transport fuels obligation [RTFO] and the introduction of higher ethanol blends [for example E10] are very important if the plant in Wilton is to operate on a permanent basis,” said the company.

A consultation is expected this summer on the UK’s move to E10, with a possible resulting change in the mandate not expected before spring 2107.

The Ensus plant was bought by its current owner in July 2013 and has had a chequered past, with technical and market issues causing several prolonged closures.

At peak production the plant has the potential to use 1m tonnes/year of wheat, although it has in the past used a combination of wheat and imported maize in its feedstocks.