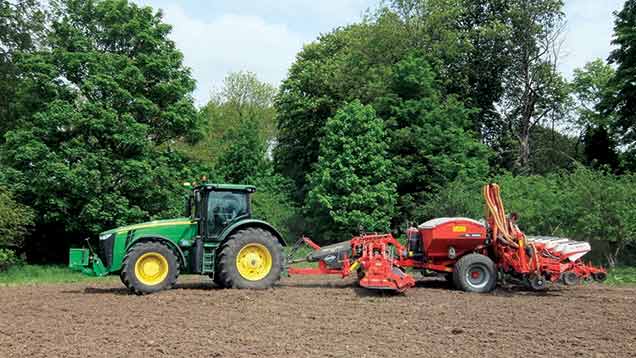 Building an AD plant has become the first port of call for anyone interested in branching out from the farming norm.

Early interest in the business was built on the back of generous Feed-in Tariffs and interested growers were rewarded with some very long-term growing contracts. That has seen the number of farmers feeding digesters on their land shoot up in the past few years.

The plants are often funded by a third party, with the host farm receiving rent for the site, free heat and power, and tonnes of digestate to spread on the fields.

A 1MW digester will eat roughly 440ha of maize silage each year, which works out at about 22,000t/MW. Sugarbeet, wholecrop, grass and vegetable waste are also used to keep the plant fed.

That offers plenty of opportunities for local farm contractors, not only to harvest the silage and cart the slurry, but also to deal with the digestate that comes out the other side.

To do that they need an increasingly sophisticated machinery fleet with the capacity to shift huge quantities of material.

The long-term nature of biogas contracts, which can be up to 20 years, means as a contractor you can more comfortably justify big investments in some of the kit.

With that in mind, we have picked out a few of the latest machines that might help do the job.

For contractors, getting the job done is all about covering the land efficiently. That means drills are getting bigger and more sophisticated.

Such a prodigious output might not be realistic in the UK, but two 16-row Maestros have recently been sold to a big operator in East Anglia.

Other manufacturers have also experienced sharp rises in precision maize drill sales. That includes Kubota-owned manufacturer Kverneland, which has seen its Optima drill reach areas of the country that have never previously been drilled with maize.

In many cases, buyers are paying out for all the optional extras, including auto row shut-off, electric drive and RTK steering, according to KV.

Auto-spout guidance systems that speed the job are coming into their own.

The Norwegian maker has been busy experimenting with using the drill for energy beet as well as maize, which could potentially trim the cost of investment for contractors offering both services.

The spacing of the seeding units on the Optima can currently be altered from 45cm to 75cm.

Running a self-propelled forager has long been a service associated with contractors because of the rather extreme costs of buying and running them.

The annual UK market is worth about 160 units, while in Germany more than 530 were sold last year.

That difference is largely down to the number of farm-based AD plants in each country – we breached the 80 plant mark not too long ago, while the Germans total well above 8,000.

However, UK forager sales are changing. Horsepower is on the rise this side of the channel as more contractors and growers invest in machines capable of chopping large quantities of crop destined for biogas.

The higher road speeds of Fastracs is making them attractive to contractors.

To get the best out of them, anaerobic digesters demand crops with a short 6-10mm chop length. The more consistently-sized the material is, the higher the yields.

This throws up an awkward conundrum to contractors just getting into the business – get the chop length right and sacrifice daily output, or hurry the job and potentially lose quality.

In most cases the answer is to crank up the power. Sales of 650hp+ machines are on the rise and buyers can specify as many as 60 knives/header to get the desirable chop length.

As the job gets more specialised, it is also more important than ever to have a skilled driver in the forager’s seat.

The biogas market is also opening up new opportunities for beet harvesting as new growers consider slotting energy beet into their rotation.

Many silage contractors will have spent more hours than they care to remember trying to do the maths on justifying a lorry to replace several tractors and trailers.

It starts to get more feasible once you are travelling more than five miles to the tipping site, but there is still the challenge of quickly moving 20t of loose maize from trailer to trailer.

We featured a range of specialist ejector-type trailers earlier this year that are now being run by contracting outfits. Some, such as the Fliegl ASW 271, use an unloading auger. Another German firm, Hawe, goes about things differently, using a blowing spout to shift material out of its triple-axle trailer.

The other option for this sort of set-up is to use a field conveyor system. French firm Perard and Stevenage-based JW Fabrications are two companies that offer such a machine.

One of the big benefits of a conveyor system is that it allows a couple of trailers to work solely in the field, which keeps mud off the road.

Large logistics companies have also picked out the biomass market as a good opportunity to expand. One of the iconic names in haulage – Eddie Stobart – has set up Stobart Biomass. In the main it deals with woodchip, but the company is also making its trucks available for maize.

It is also worth bearing in mind that what comes in, goes out. About 90% of the volume of material fed into a digester comes out as either liquid or solid digestate.

This has led to large slurry spreader sales increasing, but for every spreader and nurse tank, you will need a gang of tankers to keep it busy.

High-capacity slurry haulage is an expensive investment, though several manufacturers are starting to shift stock.

Whether it is biogas or dairy, clamp consolidation is often the constraining factor in overall harvest speed. Biogas clamps tend to be larger than dairy equivalents, which allow larger equipment to operate.

The Claas Xerion is a popular choice. It might have been designed with fieldwork in mind, but it has turned into one of the kings of the clamp.

It comes with up to 500hp on tap and the combination of its build weight and an extra 12t mounted on the rear platform and hitch means there are few machines better at squishing down the clamp.

That has led to several contractors dipping into the Xerion second-hand market specifically for clamp work.

An alternative approach to sheer weight is to invest in something designed to work on slopes.

The Pistenbully might have made its name in the Alps, but its ability on the silage clamp has caught the eye of several buyers and UK importer Off-Piste Agri has brought five units across the Channel already.

There are now five Pistenbully working on UK clamps in the UK.

The juddering movement of the tracks and fast travel speeds allows the machine to lay down lots of thin layers to improve compaction.

But while all those self-propelled machines carry six-figure price-tags, Kelvin Cave’s Silopactor is at the other end of the scale. The budget alternative uses 11 train wheels mounted on an axle and costs a modest £7,000.

There are still doubts about the overall energy balance of growing biomass crops. To get a better idea of their legitimacy as a long-term renewable fuel, operators must accurately record all inputs and outputs so they can calculate the crop’s carbon footprint.

He switched from a combinable crop-based system back in 2012 when the digester was built. That saw him make some big machinery commitments, which included chopping in the combine for a Krone BigX 700.

The forager eats 36,000t of crop each year, which is planted using a Kverneland Optima maize drill and Exacta Geospreader that use the same Tellus terminals.

RTK guidance helps reduce overlaps and, in turn, the farm’s carbon footprint. The drill, which runs behind a Sly Agri Stripcat strip-tiller, is also able to switch between seed types in less than 10 minutes.