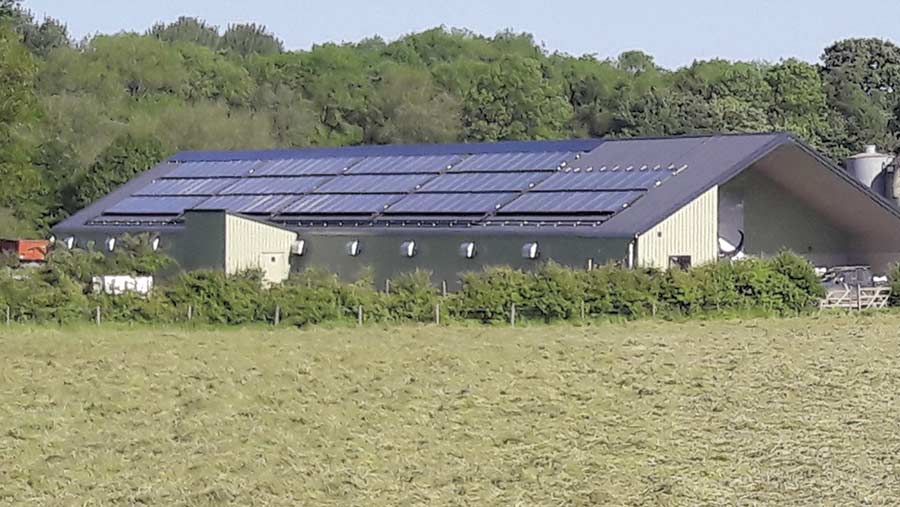 It is four years since one of the UK’s largest commercial solar thermal hot water systems, a 192kWth array to supply heat for rearing game birds, was installed for JE Barker and Sons at Great Berwick Farm near Shrewsbury.

Despite costing £110,000 to install, the system has almost paid for itself already through gas savings and Renewable Heat Incentive (RHI) income.

The new 176kWth system was fitted to an existing building by Caplor Energy in May at a cost of just under £100,000 and Sam Barker is confident it should also pay for itself within four to five years.

To reduce costs some, work was done in-house, including digging trenches for insulated piping, constructing angled frames for panels and placement of panels on the roof.

Mr Barker says the new panel modules are much larger than those in the first array, making installation considerably quicker, with fewer individual connections.

The original 192kWth array comprised 126 panels and took three months to install, whereas the latest system is made up of just 24 panels and went up in three hours using a crane and with the framework already installed.

Despite a few minor teething problems, he says both systems are working well. “Solar thermal is a fantastic technology; it’s so simple and if something does go wrong it’s usually just a sensor or pump, which is relatively easy to fix.”

Key to maximising payback is the ability to displace large amounts of bought-in energy (in this case, gas) throughout the year.

The farm’s main heat demand is from the under-floor heating system in the primary poult rearing shed, built a year before the first solar array was installed.

The building was designed with solar in mind, featuring a south-facing 30deg pitched roof.

“We initially built the roof with a view to attaching solar PV, but the farm’s single-phase electrical connection wasn’t suitable, so it was then someone suggested solar thermal instead,” says Mr Barker.

Once the building is empty of birds, it is cleaned and sterilised in time for storing grain, with the under-floor heating doubling as a drying floor. In winter it is also used for storing and drying timber for a biomass boiler elsewhere on the farm.

“Before installing the solar thermal our gas bill was around £16,000 a year, but that dropped to £5,000 after completing the first system. We’ve expanded the business since then, so I estimate we are probably saving nearer £20,000 a year in gas bills now. RHI income on both arrays is worth around £35,000 a year.”

Insulated buffer tanks are useful for storing hot water (up to 40-90C, depending on sunlight) for short periods, so can even out daily variations in solar radiation.

Currently each solar thermal system has a 10,000 litre water tank and another 20,000 litre tank has just been installed to store as much heat as possible from peak sunlight.

If heat cannot be used or stored, the system automatically shuts down, so the plan is to capture as much as possible.

Improved panel designs and renewed RHI support for solar thermal up to 200kWth mean there is a window of opportunity for businesses to earn healthy returns and quick payback while the RHI still exists, says Alan Warren, sales surveyor at Caplor Energy.

The development of larger panel modules means installation is quicker and simpler than in the past, with fewer connections and less risk of system leakage or breakdown, he says.

As with any renewable energy project, Mr Warren insists correctly sizing systems to match the heat demands of the business is essential to get the best returns and it is not a case of installing systems to maximise subsidy return.

In the case of solar thermal, a constant on-site heat demand is ideally needed all year round as it is not possible to store heat for long periods or transport it large distances. Typically around 1C is lost along every 100m of insulated pipework.

What is solar thermal?

Solar thermal systems work by collecting heat from the sun and transferring it to a fluid that is used to heat water. This is usually used for heating homes or other buildings. Large-scale systems can generate electricity through steam.