The advertising watchdog has rejected complaints against an energy company that launched a campaign to promote animal-free electricity.

The Advertising Standards Authority (ASA) launched an investigation after people complained about an Ecotricity advert featuring an image of a power socket with raw minced beef coming out of it. 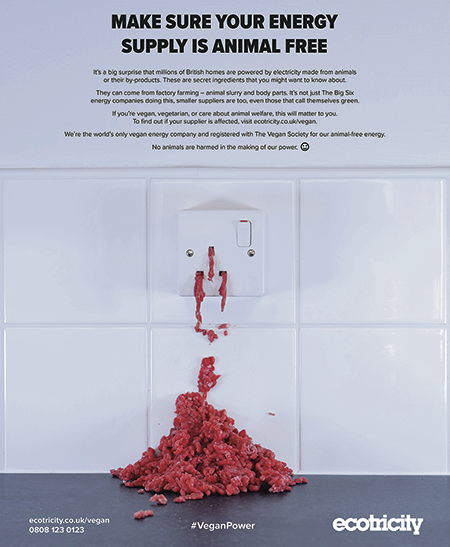 The company said it wanted to “lift the lid on the energy market’s dirty secret”, arguing that electricity was often generated from animals or their byproducts.

“These are secret ingredients that you might want to know about,” said the advert.

“They come from factory farming – animal slurry and body parts… If you’re vegan, vegetarian or care about animal welfare, this will matter to you.”

Ecotricity claimed it was “the world’s only vegan energy company, registered with the Vegan Society for our animal-free energy”.

It added: “No animals are harmed in the making of our power”.

Four advertisements were seen during July and August 2018 – including on Facebook.

The advertiser’s own website stated: “If you switch to vegan energy, you can be sure your energy bills don’t support factory farming or the unethical treatment of animals.

A number of complainants challenged whether Ecotricity could substantiate its claims to supply vegan or “animal-free” electricity.

They argued that energy supplied was via the National Grid and thus came from various energy suppliers, including those who used animal byproducts.

Two complainants said the adverts were offensive and distressing.

In response, Ecotricity said it ensured the power it inserted into the National Grid came from sources that did not use animal byproducts in their generation of electricity.

It said this matched the energy used by their customers, which was thus animal-free.

Ecotricity also said it had secured registration with the Vegan Society, which had audited the company’s supply chain and found its electricity to be vegan.

Rejecting the complaints against Ecotricity, the ASA said it was satisfied that the electricity generated by the company was vegan or animal-free.

The ASA acknowledged some consumers were likely to find the advert to be distasteful or unpleasant – but said it was unlikely to cause serious or widespread offence.

It also acknowledged that the claim “no animals were harmed in the making of our power” could be interpreted as suggesting that no animals had ever been harmed by Ecotricity’s infrastructure.

This might include the company’s wind turbines, including any incidental deaths, for example, of bats or birds accidentally flying into turbine blades.

But the ASA said given the advert was for vegan electricity, consumers would interpret the claim to mean that no byproducts were used from farm animals slaughtered for meat.

“Because that was the case, we concluded that the claim was not misleading,” said the watchdog.

Ecotricity spokesman Will Guyatt said: “The ASA’s decision not to uphold a single complaint against our Vegan Power campaign is not a surprise, and we thank them for their thorough investigation.

“The same old arguments get levelled against green energy advertising again and again, but we adhere to a very clear set of guidelines to ensure our ads are truthful and proper.

“We intentionally wanted to raise awareness that animals are a secret ingredient powering homes across Britain and our campaign was seen by almost 10m people, and trended online.

“Many of us are already make choices according to our principles, but this campaign saw a large number of people join Ecotricity for the first time.

“It angers a tiny minority, but Vegan Power exists.”