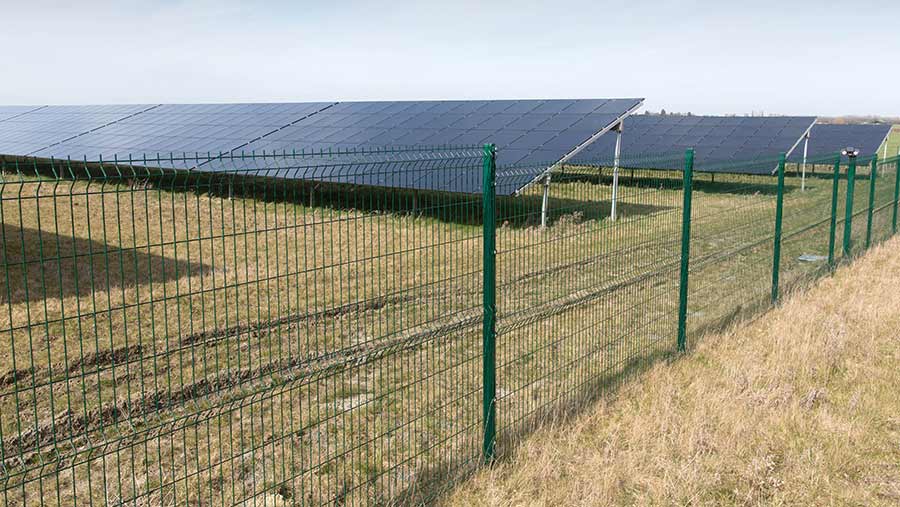 Those letting out land for solar farms need to be very careful when considering offers to extend long leases, advisers warn.

Leases are typically for 25 years but landlords are being approached for extensions from year five or even earlier, says Wiltshire-based land agent George Paton of WebbPaton.

The tenants also often want an option to add batteries on the solar sites.

“Recently we have seen solar tenants become very pushy with landowners, using scaremongering tactics that rents will not be as good when the lease ends,” Mr Paton says.

Hold out for more

“What is being offered is nowhere near enough – farmers should hold out to negotiate a higher amount,” he says.

“The early German solar farms are now over 40 years old so the apparatus is proven that it will last for a long time.”

Mr Paton gives the example that on a 20MW solar farm, the tenant has probably spent £20m on the apparatus and is earning an annual income of £1.8m to £2m from the electricity.

By the end of the lease the apparatus will have been paid for and the site’s income will outstrip the servicing costs, he says.

“My view is that solar operators will be paying their landlords much larger sums than £2,500 to £5,000/MW towards the end of the current leases to retain these sites.”

Solar site finders who initially identified suitable farms often sold the planning permission and the grid connection for between £100,000 and £200,000/MW to the current solar operators and renewable funds, says Mr Paton.

“Landlords should in my view be receiving similar figures for extensions to solar leases, and if they wait I am sure they will.”

Mr Paton says many of the leases he has negotiated do not allow this without the landowner’s permission and an additional payment.

Landowners should be asking for an additional £2,500 to £3,000/MW a year (RPI indexed) before agreeing to the inclusion of batteries, he says.

“Unlike standalone battery sites, existing solar sites have a significant amount of the infrastructure such as substations and grid connections already in situ, so the rents should be higher than for battery-only sites.”

Where new solar sites are being proposed, a similar additional rent of about £2,500/year should be factored in if a battery option is to be included. This is in on top of the £1,000/acre rent which is easily achievable for new sites in southern England, says Mr Paton.