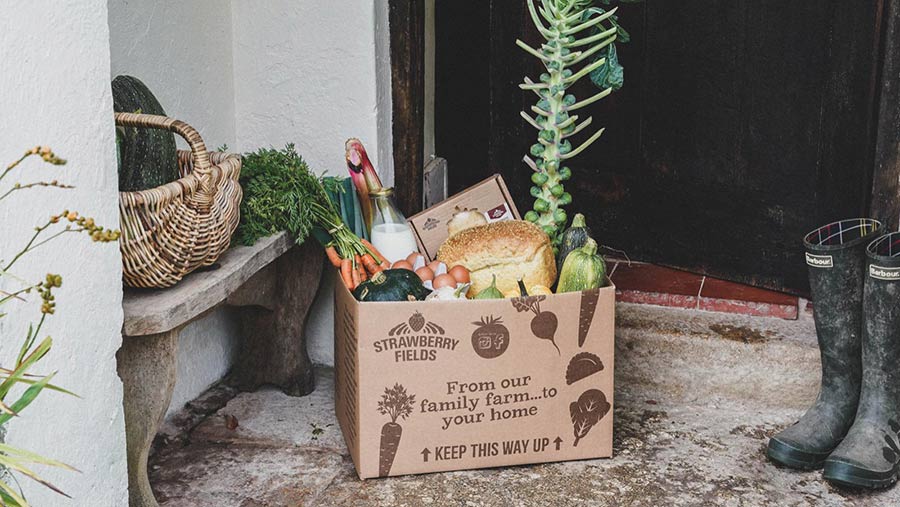 According to a Farm Retail Association (FRA) survey, 92% of members saw a significant rise in customer numbers after lockdown rules were imposed in March. Almost 80% had introduced a click-and-collect service, while two-thirds had started home deliveries.

Combined, these two services processed more than 1.4m orders across UK farm shops between March and August, the FRA said.

To cope with the extra footfall, almost three-quarters (73%) of farm retailers said they had hired extra staff or furloughed fewer employees than expected.

Many have added services to establish themselves as quality, long-term alternatives to supermarkets.

See also: So you want to get paid for having dogs on your land

We take a look at two farm businesses who have adapted to cope with the new situation. 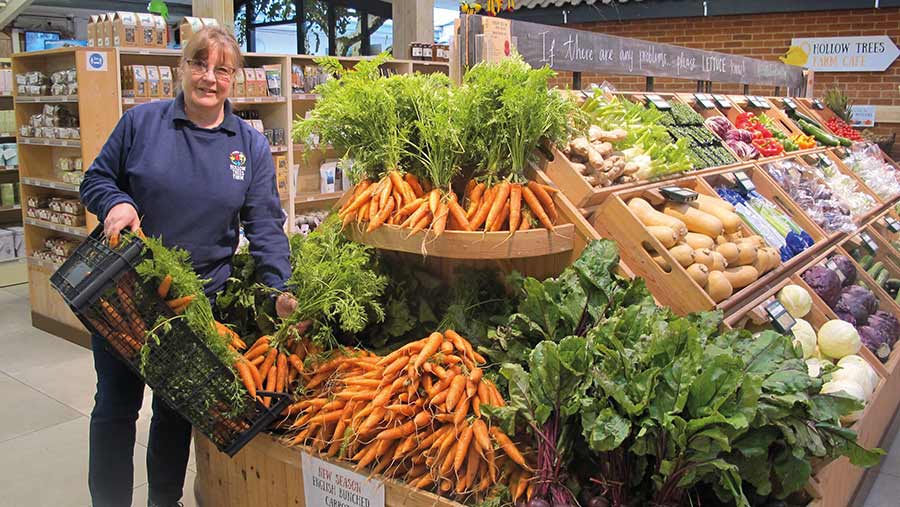 In the early phase of the coronavirus pandemic, custom for the café, farm walks and school visits dried up, says Sally Bendall, who owns Hollow Trees Farm with her husband, Robert.

There was no option but to close these enterprises and put most of the associated staff on the government furlough scheme.

In stark contrast, the farm’s shop faced a deluge of enquiries as supermarket deliveries were hard to obtain and many customers did not want to go to crowded supermarkets.

New customers quickly found the shop by word of mouth or through the farm’s website. “When those people realised what we could offer, they flocked to the shop,” says Mrs Bendall. This pushed shop sales up 77% year-on-year between 1 March and 1 July.

Despite lockdown measures easing after the first few months and online waiting times returning to normal, the business has retained most of its new custom.

Sales remained 74% up year-on-year during July, so the business has retained a big proportion of the extra sales gained at the lockdown peak.

Customer levels have been maintained by setting up new initiatives, acting on feedback and staff adaptability.

A popular free click-and-collect option was introduced, but demand for this has dropped off significantly, so a £5/order fee has been introduced to cover the cost of admin and retaining staff to pick orders.

This runs three days a week, requiring 48 hours’ notice. Collection time slots have been dropped so customers are asked to call when they arrive and the order is taken out to them.

Under full lockdown, as more people became aware of the shop, pressure mounted on staff and the back office management team was switched to taking customer calls and answering their emails. The change in roles was typical of the workforce’s willingness to pitch in, Mrs Bendall says.

To streamline processing, emails were diverted to a new, single address for orders while an extra phone line was installed to cut customer waiting time.

Mrs Bendall says listening to customers and taking time to talk to them about their needs and order issues has created loyalty. That has been built on with the introduction of a loyalty scheme offering savings and discounts.

This will be developed further to help harvest customer information and better target emails, triple-points events and other promotions.

Safety was also a big issue for many customers. Visible changes such as Perspex security screens were added, helping vulnerable customers feel safer

Opening times were extended to 7pm to space out order collections. “We have continued with our extended opening times and this has proved popular during the summer,” says Mrs Bendall. “In the run-up to Christmas, customers might still prefer to shop later at quieter times, so we plan to continue this until Christmas at least.”

Customers also requested a wider range of products. “Essentials like toiletries, washing and cleaning products were added so customers could do all their shopping with us,” Mrs Bendall says.

“We have continued to offer everyday essentials but have tried to be more consistent with a quality range whereas during lockdown certain shortages meant we could only get what was available.”

Many other recent developments relate to technology. “We have added a lot more online products and will be adding more in the run-up to Christmas,” says Mrs Bendall.

“Our Farm Trail has opened as a bookings-only service, so we have had to install new software and systems to deal with this. Our café will be the same when we open, but it involves a different installation. We have had to get up to speed on some new systems very quickly.”

Customer service training was carried out as vulnerable customers returned after shielding, to ensure staff can make them feel safe.

The business also provided extra sanitiser stations and masks for all the staff, as well as training on how to keep themselves safe. 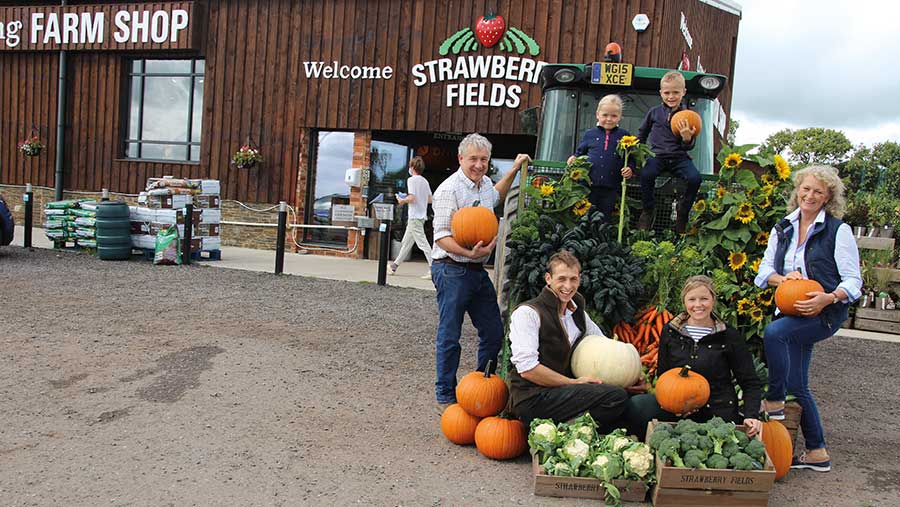 Like many farm shops, Strawberry Fields in Devon witnessed a peak week of panic-buying ahead of the spring lockdown.

Business owner Laura Mounce says: “People went absolutely nuts. There was a huge demand spike, particularly for products such as yeast and flour as home-baking took off.”

Nationally, millers couldn’t keep up with demand for small (1.5kg) bags of flour, so online retailers and supermarkets ran out.

By being adaptable, a relatively small business can steal a march on its larger competitors in this kind of scenario, Mrs Mounce says.

Although over-the-counter sales through the bakery and delicatessen dwindled, the Mounces switched to providing ingredients and bought in more flour, not less.

“We bought enough ingredients to ramp up our own baking operation and repurposed the closed restaurant to store up to 20t of flour,” she says.

The farm’s Facebook page and other social media platforms were used to publicise the availability of flour. Staff were switched from working in the closed restaurant to filling 1.5kg bags of flour to sell. Demand was huge and attracted new shoppers.

Bakery production for ready meals such as pies was scaled up and a night shift was established to keep the supply going.

“As customers came in for these products, we also stocked up on other staples like cleaning products so they didn’t have to then shop elsewhere,” Mrs Mounce says.

Takeaway roasts were sold on Sundays, which have proved hugely popular. “The takeaway service has still kept going and we have recently seen an increased uptake in this service.

“It dipped when we first reopened, but we are most definitely going to keep it going, as we just don’t know what the future will hold.”

Typical of many FRA members, Strawberry Fields started a click-and-collect service to cope with larger orders.

However, they hadn’t predicted the level of interest. “It was completely uncontrollable with an average of an email enquiry a minute and hundreds each day,” Mrs Mounce said.

Rather than lose customers, the Mounces bought into an existing commerce platform, Shopify, which handles orders and payments.

It was clear from emails received that enquiries were from a much wider geographical area than they had seen previously. To capitalise, the farm used the trading package to create an online shop, which has since been extended.

A further development under lockdown, which will continue, was an extended local delivery service.

The farm had two vans and a full-time driver has been employed and deliveries are now made six days a week within a 15-mile radius. The vans also do longer runs to deliver in cities on certain weekdays. A national delivery service is also being launched.

“This will happen after Christmas, but is all planned and ready to go. We just thought as we are not sure what Christmas may bring, we want to get Christmas under our belts and then can make sure that we do a very good job to every customer that walks through our doors, as well as the national ones, hopefully.”

Overall, custom has grown and remains more than 50% above 2019 level. However, Mrs Mounce points out some of that increase is due to an expansion of the shop area, which pre-dates the pandemic.

Key to the success is willing and adaptable staff members, who in many cases switched from their roles at a moment’s notice and worked longer hours, Mrs Mounce says.