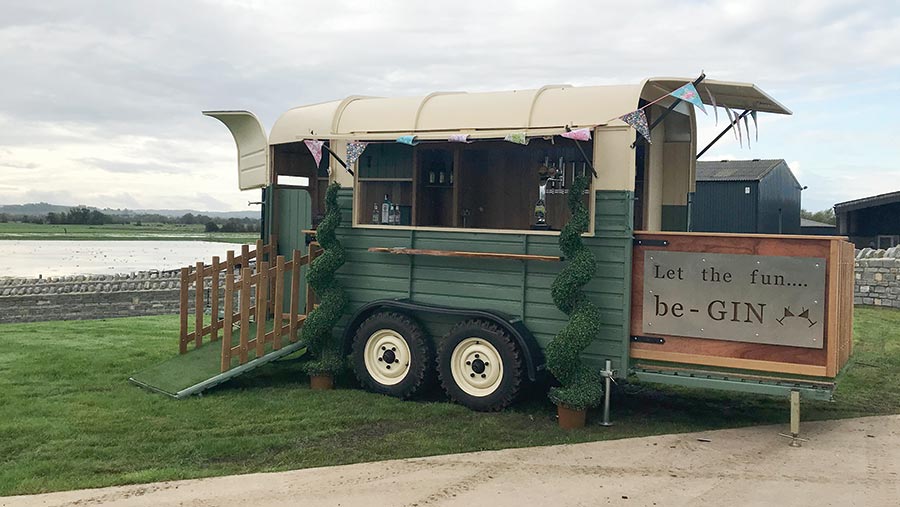 Andy Fussell, who runs a substantial farming and contacting business based at Rode, near Frome in Somerset, believes common sense is usually the best approach to diversification.

Alongside this he has developed Fussell Foods, producing bottled oilseed rape and associated products, a large haulage operation, a rapidly growing building supplies business, a feed blending plant and, most recently, a fishing lake.

In a fluid economic background, traditional thinking has to be questioned, he says.

“For example, we have rented in our two most recent trucks because of general uncertainty – it reduces the capital investment and at the end of four years, they go back.”

It is also important to understand and accept when you need expert help, whether that is with a planning issue or branding, he advises.

Mr Fussell’s biggest challenge or headache with his diversified businesses has been planning.

As the enterprises expanded, he needed to move them from a cramped 1.2ha site, which is the original farmstead, to a 3.6ha greenfield site.

It took seven years to achieve planning for this and his final approach was to invite each member of the 16-strong planning committee to visit the site individually.

Planning for his most recent new venture, a fishing lake, took two years.

“At first I couldn’t even believe I needed planning permission to put in a lake,” he says.

Mr Fussell also outlined the highs and lows of getting products on to the shelves of the big retailers.

A huge amount of work went into getting his oilseed rape oil products into Sainsbury’s, Morrisons and Tesco.

However, after a year, he lost the Tesco listing overnight.

“That’s 1,400 stores just gone. It’s a very hard lesson to learn and a lot of business to make up.

“Our core business is on now the street at farmers markets and at shows. 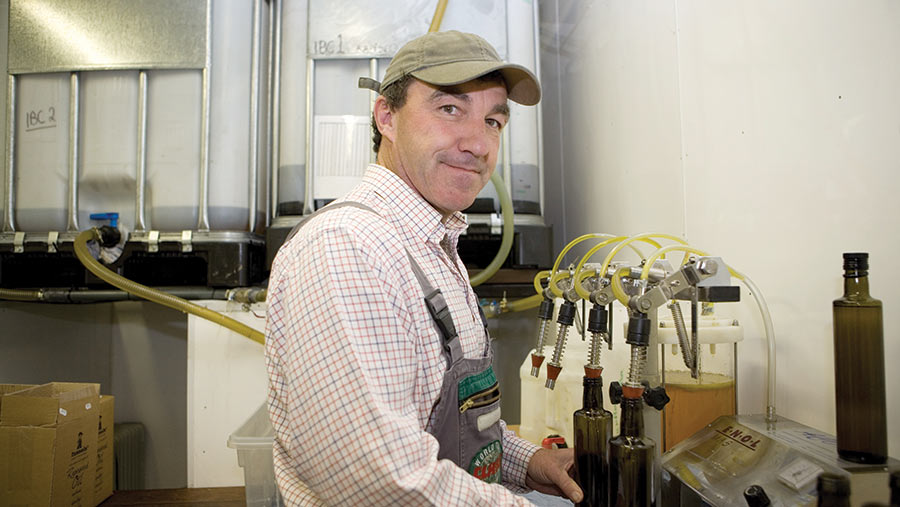 “We also now have people pay £20 a time to come on the farm, learn about the product, see a cooking demo and a tasting.

“They see how the crop is grown and how we create the product from field to bottle.”

“Farming needs to engage with the public – I can’t emphasise enough how much the general public want to know about what we do. We don’t hide anything.”

With so many enterprises of different types, Mr Fussell has had to learn to delegate – something which he admits did not come easily.

Having appointed trusted managers for each of the diversified businesses, he is now a firm believer in allowing them to run their areas, meeting with them regularly to discuss their management reports.

However, keen to see the physical results of the farming enterprise, he still does all the combining.

The Farmers Weekly/Carter Jonas diversification survey results showed that after funding, planning and the likely cost of securing permission came second and third respectively among the main challenges experienced by those trying to set up new non-farming ventures.

Thurloxton Fruit Growers is a Somerset pick-your-own-fruit business, which has been expanding year on year.

More than 10 years ago, the current owner approached the local authority to discuss expansion proposals for their retail space and was told that there was enough vacant shop space in Taunton or Bridgwater.

Following significant changes to planning policy over the past few years, a full planning application for a new additional building, prepared and submitted by Carter Jonas, has recently been approved and will allow further expansion of the business.

Sell your story and make the most of social media

Raising and marketing free-range bronze turkeys is a growing venture for Will and Kate Martin of Treway Farm near Truro, Cornwall. 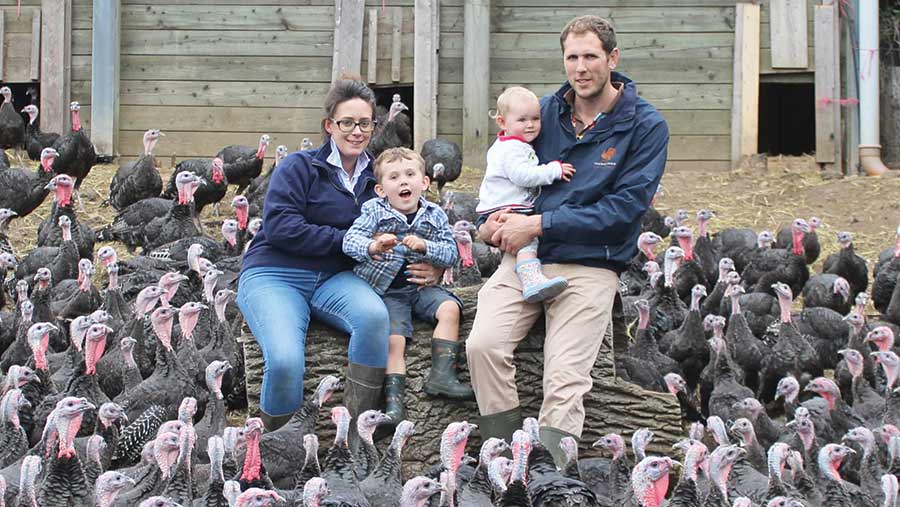 They started this almost as a hobby, then in 2015 they got serious, taking delivery of 250 day-old turkeys.

Numbers have grown each year since and they are rearing 850 birds this year and hoping to do 1,000 next year.

With the birds arriving in June, the venture fits neatly with their suckler beef enterprise, using the shed that is needed after Christmas for the beef cattle.

All of their turkeys are sold direct to the consumer and they have achieved Golden Turkey producer status, of which there are only 40 nationwide.

The birds are sold oven-ready and delivered across Cornwall and south Devon.

However, most customers like to collect their bird at the seasonal pop-up farm shop that Kate and Will open.

“Because we sell direct, there’s a huge amount of admin, but we get all the profit,” says Kate.

Between 500 and 600 people visit the farm within the few days before Christmas, offering a chance to tempt them with associated festive foods.

Marketing includes attending many shows, for which they have bought a catering oven, something the Martins wish they had done sooner.

“You can have the best product in the world, but if nobody know about it, you’re not going to sell it,” says Kate, who is also the driver of the hugely important social media side of their marketing.

“People buy from people – they are buying into you and your family, so sell them that story.

“Do as much as you can to embrace every PR opportunity.”

Kate advises “shameless” use of children in promoting farm produce.

“Posts with kids in them so do so much better,” she says.

She also advocates entering awards. “The cost is small but a gold award can boost your brand.”

The Martins have also benefited from joining producer groups.

“And you learn so much for others – they were once at the stage you’re at now.”

Apart from the sleep-deprived hectic weeks in the run-up to Christmas, one of their main challenges is getting good seasonal staff, and as they expand, so this challenge grows.

Aside from upping the turkey numbers again next year, the next step for Will and Kate is to market their bull-pen holiday cottage, which is in conversion and almost complete.

They also want to relaunch their boxed beef scheme with stronger branding and marketing.

As part of this, they plan to join the Pasture for Life brand, which guarantees that members’ meat is produced from animals fed exclusively on pasture.

Budgeting for a new non-farming enterprise in an unfamiliar market demands good research.

The first step is to assess the strengths, weaknesses, opportunities and threats for the project, says Steph Emmerson of the Farm Consultancy Group.

“When building a budget, it’s important to carefully consider the likely timeframe in which a project might progress – not forgetting that planning permission, grant funding and building work can often take far longer than initially planned or hoped for.”

Steph suggests building in a contingency of 10% for likely additional costs of the project.

The Farmers Weekly/Carter Jonas diversification event was hosted by Jenny and Michael Churches of Godney Farm near Wells, Somerset.

They farm with their son Andrew, and after a two-year planning saga, achieved permission to refurbish and improve a deconsecrated church next door to their farmstead. 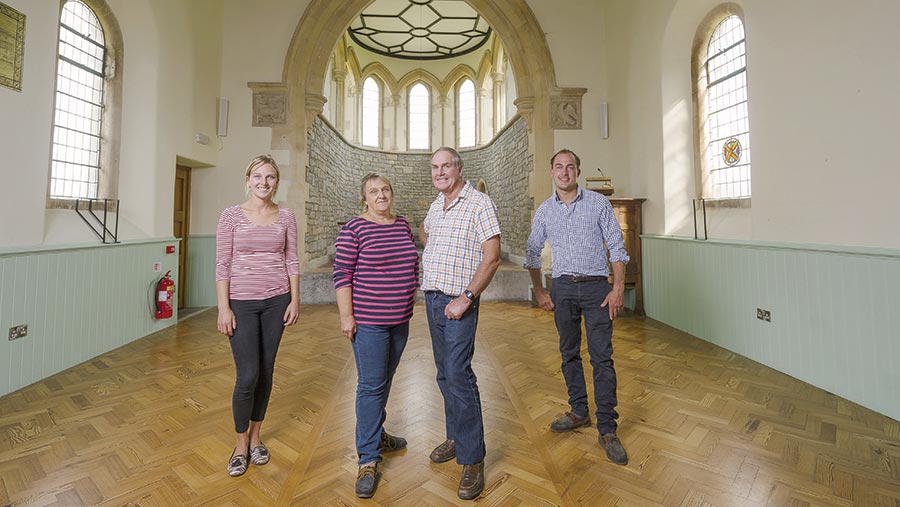 Their sensitive conversion of this into a successful wedding and events venue saw them listed as finalists in this year’s Farmers Weekly Awards diversification category.

Things have gone well, with the first wedding taking place in 2015 and 29 already booked for next year, with deposits paid in advance.

One wedding has even been booked for 2023 and the deposit paid – “Where in farming can you get paid two years in advance?” says Mr Churches.

The Churches run 130 milking cows, a suckler herd and sheep.

Their son Andrew has also converted two Rice horse trailers into event bars, one of which generally stays at the farm for functions in the church, the other he takes to other events.

Thanks to our headline event sponsor Carter Jonas, who enabled us to run this diversification on-farm event earlier this month. Farmers Weekly had full editorial control of this report.