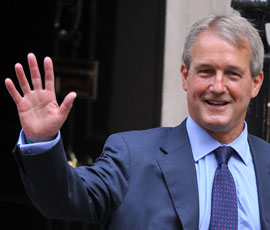 The way forward for farmers was to increase returns by adding value to the basic material of milk, Mr Paterson told an NFU fringe meeting at the Tory Party Conference in Birmingham.

The Milk Marketing Board, which was abolished in the 1990s, had held British farmers back by 30-40 years, Mr Paterson told listeners at the Crowne Plaza Hotel.

Mr Paterson said one of his constituents was only allowed to process 100,000 litres of milk and make one type of cheese a year.

Today, the same company was successfully producing eight or nine different cheeses – to critical acclaim at home and abroad.

“That same constituent now is winning so many prizes in international cheese competitions I have given up writing letters of congratulation,” Mr Paterson said.

Adding value was the only real long-term solution to problems associated with low farmgate milk prices, he added.

“Ultimately, this is an issue where the market has to decide.”

Mr Paterson said he was “always a bit ambivalent about being too critical of the supermarkets,” which he suggested were an efficient way of getting food in front of consumers.

Farmers who were able to get products stocked by supermarkets had a major advantage over their competitors – including producers overseas who were trying to sell to the UK.

The supermarket which ran the promotion knew the cheese manufacturer had invested lots of money and would be desperate to shift the volumes of cheese involved – and pay for it.

Retailers needed keeping to account, said Mr Kendall. The grocery code adjudicator was exactly what was needed to make sure there was a fair marketplace.

“I do back British farmers to be as good as any, but it needs to be on the fair grounds that the market treats them properly,” Mr Kendall said.

More on the milk price crisis