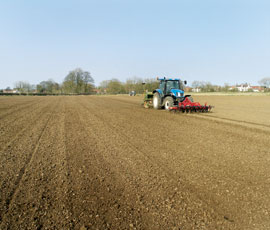 An East Yorkshire mixed farm with good buildings and plenty of accommodation offers scope for many enterprises on 128.3ha (317 acres).

Golden Hill Farm at Wansford just south of Driffield is a retirement sale for the Chapman family. In a private setting with two good houses and a let cottage, the farm is for sale by private treaty through Dee, Atkinson & Harrison, with a guide price of £2.95m for the whole.

It has extensive modern livestock and general purpose buildings as well as a substantial traditional range including a granary and courtyard. The farm is currently in arable and beef but the buildings include a milking parlour disused for several years.

Productive grade 2 medium loam makes up the 236 acres of arable land while the grassland, much of which has recently been re-fenced, is grade 3 and largely permanent pasture. Single Payment Scheme entitlements are included in the sale and there is an irrigation licence to extract 13,360cu m a year between June and September.

Golden Hill farmhouse has four bedrooms, as does Westbeck House, and a modern farmhouse which adjoins the main house. The third house, a cottage converted from a granary, is let on a protected tenancy.

Much of the grassland alongside the River Hull is within the River Hull Headwaters Site of Special Scientific Interest and all of the land is in Entry Level and Higher Level Schemes since 1 August 2008, providing income of more than £10,000 a year.