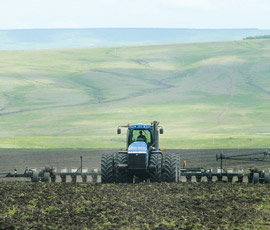 As investor interest in farmland increases across Central and Eastern Europe,  Adam Oliver  of Brown & Co reviews the market.

Land prices are firming across much of Central and Eastern Europe, as interest from institutional investors begins to translate into transactions on the ground.

This is mainly through pension funds from the USA and Canada, as well as from some European countries such as the Netherlands and Denmark. These have spent a good while researching and assessing their opportunities and are now acting.

As land ownership becomes increasingly compelling and more difficult to realise in many other countries around the world, the trend looks set to continue.

While new farmer investment has dried to a trickle in recent years, those who invested in the region in the early and mid 1990s have been through some very tough years and are now seeing capital growth and improved farming results.

Although there are significant variations in growth rates, the Central and Eastern European land market has by no means topped out. Farmers looking in this direction to expand can find the land they need and invest, with an exit strategy based on the expectation of further capital growth.

Land values in Poland have continued to mature since EU accession in 2004 and are still firming, particularly for good-quality land. Prices range from £1,200/acre up to £4,800/acre at the top end. For top-quality land this represents an increase of about 25% compared with three years ago.

As with other member states, EU accession in 2004 helped the agricultural sector in Poland. It received grants for machinery and buildings, and single farm payments were introduced, which last year amounted to about £170/ha.

Romania’s land market is also gaining. It is divided into two distinct markets – very small parcels of land that are not consolidated and similar parcels that are merged into large workable blocks.

Consolidation is the process whereby very small parcels of land owned by many small landholders are amalgamated, sometimes by purchase and sometimes by swapping, to achieve workable blocks that are 100% in the same ownership. Where 100% is not possible, a small proportion is rented.

Unconsolidated blocks on the primary market range from £600/acre while consolidated workable blocks of land normally change hands at £1,000-1,800/acre. This is about 5-10% higher than a year ago and there is definitely increased interest in the Romanian land market compared with 2011 and 2012.

There is a moratorium on all agricultural land sales in Ukraine. This means it is not possible to own land in Ukraine, but long-term lease rights are available. The value of these rights has firmed in the past six months, ranging from £75/acre to £300/acre for typical 10-20 year agreements, on top of which an annual rent of perhaps £20/acre is paid.

This typically represents a 10-20% rise from 2012, but in many cases is still only 50% of the market highs that were being paid in 2008 before the global financial crisis.

The moratorium has been scheduled for review in the past but has so far not resulted in a change in the legislation. While it is likely to be revisited in the future, there are no guarantees or timelines for when this may take place although lease agreements carry the right of pre-emption to purchase the land whenever the legislation is changed.

Russia’s land market remains relatively stable, with registered freehold farms that have reasonable infrastructure changing hands at £125-300/acre. Values remain largely similar to 2011 and 2012, with considerable supply dampening the market, but there is evidence of premiums now being paid for land with irrigation potential.

The announcement of up to 50% grant support under the federal government’s latest agricultural development plan has improved the prospects for such land. The grants cover both renovation of existing infrastructure and new irrigation projects.

Over the past 12 months Brown & Co has completed several acquisitions and has others ongoing in Romania, Poland and Ukraine, both for institutional clients and family interests.

The recent sale of Continental Farmers Group (CFG), which farms about 30,000ha in Ukraine and Poland, to a consortium from Dubai is an example of the growing interest in the region.

This interest has several drivers apart from wider factors such as population growth and the changing economic status and demands of consumers in countries such as China.

For investors from the Middle East the main drivers seem to be food security-related issues while land ownership, operating returns and potential land appreciation are important factors for other investors.

The countries in the world where land ownership is possible and where title is at least reasonably secure appear to be diminishing. The increasing desire of some countries to retain precious resources such as productive agricultural land, minerals and water – often referred to as resource nationalism – is likely to make the CEE region more compelling for investors.

Crop yields are relatively modest by Western European standards, but so are costs.

Across the region, wheat yields range from 3.5t to 8t/ha, with an average around 5t/ha with the highest yields generally in Poland and the lowest in Russia.

Added to that, the opportunity to manage land very well and translate improved yields and operating returns into enterprise value and/or an increase in the value of the land seems to be driving a number of investors.

We would generally recommend purchasing land over renting it (Ukraine excepted), but this does depend on the specific circumstances. A land amalgamation strategy in Romania would be centred on land appreciation, whereas acquiring 5,000-10,000ha of leasehold in Ukraine is all about operating returns with the potential (or option) to eventually buy out the freehold in the future if there is a change in legislation.

For an investor seeking relative security we would recommend a diversified portfolio of land ownership across Poland and Romania. This could range from 200ha to 10,000ha. For very large-scale investors, Ukraine and Russia are really the only places that suit, offering the opportunity to farm 20,000ha, 30,000ha or even up to 100,000ha-plus.

While risk levels are highest in Russia and Ukraine, the results in the long term could be very interesting if quality management is put in place early on.

Adam Oliver is a partner at Brown & Co, responsible for Central and Eastern Europe