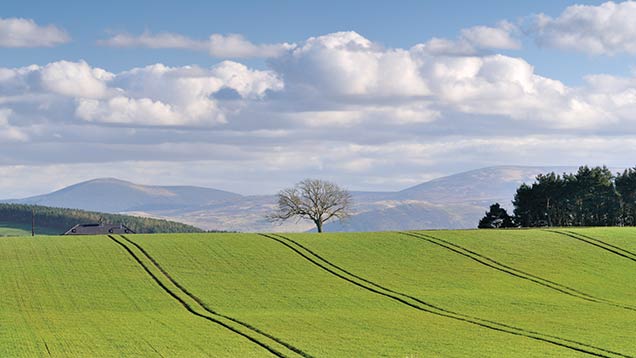 A range of well-equipped arable farms and bare land are for sale this week, bringing almost 2,000 acres to the market in England.

Leading the pack with about 1,000 acres of mostly arable land, renewable energy installations and a range of farm buildings is Felkington Farm in the Tweed Valley.

The farm includes about 873 acres of arable land and 68 acres of grassland with potential to be brought into arable production.

The land is in one block and is classified as Grade 3, with mainly deep, sandy loams.

A cropping rotation of mostly winter wheat, winter OSR, winter barley and beans is in place and the first wheats have averaged 4t/acre for the past five years. The grassland is let on seasonal grazing licences.

A 15kW wind turbine, biomass heating and small-scale solar PV installation provide an annual income of about £23,000 plus energy for the farm’s four dwellings.

It is contract farmed, with the acreage put to wheat, oilseed rape and beans. There is a range of traditional buildings and modern grain storage for 1,400t.

The farm is situated in an Area of Outstanding Natural Beauty and is entered into an ELS agreement, which expires in June 2016.

About 228 acres of fertile arable land is available at a guide price of £3.95m with the sale of Portway Farm near Andover.

The light, silty Grade 3 soils are split into five large enclosures in a ring fence with internal tracks.

A grain store provides capacity for 500t, while a neighbouring steel-framed shed can hold a further 150t. There is also a five-bay open-fronted shed.

A retirement brings 270-acre Mayhouse Farm near Ombersley to the market at a guide price of £3.85m as a whole, or in five lots.

The Grade 3 land has been put to a winter wheat, oilseed rape and bean rotation and has good road access to its fields. There is a modern grain store with capacity for 700t and a range of older portal-framed barns.