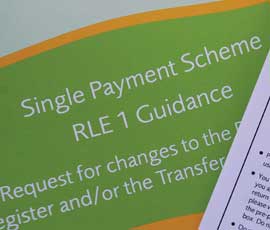 Single farm payment entitlement trade has picked up in recent weeks, responding to the expectation that in England they will be rolled over when the new Common Agricultural Policy starts in 2015.

Non SDA entitlement values in England are reaching £270/ha, up from £200/ha at the end of September, according to George Paton from WebbPaton, who expected the rise to continue.

Entitlements had been decreasing in value as it was not clear they would continue to be used after 2015.

The majority of trading is done in the three months to April in a normal year, but this year buyers were coming in earlier than usual, said Mr Paton, to ensure they do not miss out on six years’ worth of payments on new land acquired.

English entitlements, which had been equal to the value of one year’s SFP – a multiplier of one – for the past two years, could rise above two years’ multiplier in 2014, said Mr Paton.

“We could even see a return to the multiplier levels we saw in the last round of CAP reform in 2005,” he added.

In the current quiet market, Scotland, Wales and Ireland each had a multiplier of 2.2 of the annual payment value, equal to £300/ha, but it was likely that England’s values would overtake the devolved nations’ coming up to April, he said.

Yet Mr Paton advised farmers not to wait until the last minute to buy or sell, as current values were fair.

Ashley Taylor from Townsend chartered surveyors agreed. “One year’s payment is not a bad going rate,” he said.

But he thought the market was still reluctant to pay more than that, with Townsend recording English non-SDA values currently about £210-215/ha.

While the market seemed to be almost sure the current entitlements would roll over, the Rural Payments Agency had been known to change its mind or go against what was predicted in the past, he said.

A buyer could break even if they bought now, but there was still an element of risk in waiting until later in the year to sell, he said.