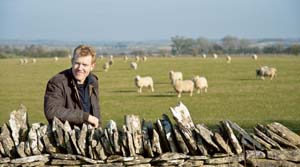 Like most farmers, Adam Henson has to balance commercial decisions about farming profitably with the environmental management expected of farmers and landowners.

“Although we’re determined to do as much for conservation as possible, a sustainable business has to be a profitable one.”

It is his declared aim to “farm with conservation in mind”, but with only three years left on his Cotswold Hills Environmentally Sensitive Area scheme agreement, it’s time to think strategically about how the next environmental commitment might restrict his opportunities to farm for profit too.

He wants his business to be sustainable in the familiar environmental context most would understand. But he’s also trying to identify how his management decisions can bring most benefit to biodiversity on the farm, while allowing him to maximise production responsibly – so the bottom line is sustainable too.

“There are quite a lot of features here which suited the ESA nicely – for instance, we have a lot of old Cotswold grassland with traditional mixed swards and grass banks. Most of it is permanent pasture and couldn’t be ploughed up in any case. And with our rare breeds work we were running low stocking rates anyway. At the time, as well as Ewe Premium and Beef Special Premium payments, we were able to get extensification payments as well.

“We have a Site of Special Scientific Interest called Barton Larches, which was a bit of a nature oasis surrounded by arable ground.”

A survey by conservation charity Plantlife revealed this was home to the rare Cotswold pennycress plant and the Duke of Burgundy butterfly, a species whose decline is causing increasing concern among conservationists. 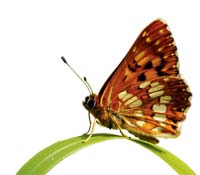 Mr Henson and his business partner, Duncan Andrews signed another ESA agreement in 2004.

“At that point we decided to put another 121ha (300 acres) of land, around the SSSI, into arable reversion. It was less productive arable land and went into a traditional Cotswold grassland mix of species like cocksfoot, fescues and trefoil.

“At the time, even with lower lamb prices, less productive grassland, and a low stocking rate, £290/ha for arable reversion was a better bet.”

Another significant part of the ESA was the construction of new drystone walls. Public access was another feature introduced.

Most of the rest of the ESA work involved introducing six-metre grass margins around arable fields. Awkward, stony edges or shaded strips were chosen, with some in wild-bird seed mixture’s which benefited the estate’s shoot.

The current ESA at Bemborough Farm comes to an end in August 2014. The Higher Level Stewardship scheme is the obvious successor. But like every other farmer, Mr Henson knows that significantly higher commodity prices mean the decision to make agri-environmental commitments isn’t as simple as in the past.

“In three years’ time we will have a significant dilemma on our hands. The economics of growing food are much more attractive now. The arguments are much more difficult to make.

In September 2004, wheat was worth less than £60/t and finished lamb prices had fallen below the previous year’s levels. “It was a flat-line payment, guaranteed. You could include it in your budget and it gave you something to work on.”

Originally, Mr Henson’s ESA agreements brought about £35,000 a year into the business’ coffers – now worth about £55,000 under the existing, expanded scheme.

Current feed wheat futures markets offer farmers ex-farm prices of about £160/t and £150/t for harvests 2011 and 2012. If the current commodities rally is sustained for the next few years, as some are suggesting, awkward field corners and shaded strips previously deemed unproductive could be worth bringing back into cropping.

There is also the question of how farmers are rewarded for agri-environmental work. The model of effectively reimbursing farmers for “income foregone” has failed to keep pace with farm outputs.

“Perhaps there’s some scope for payments to be linked to commodities prices, or at least re-assessed on a structured basis.”

Perhaps it is this lack of any visible financial reward that has left many farmers sceptical of joining the Campaign for the Farmed Environment. “It would almost seem more sensible if some of these measures were part of cross-compliance – rather than the enforcement of mandatory set-aside, for which farmers will not be not recompensed.”

As well as the implications for the bottom line, Mr Henson reckons more farmers might take the agri-environmental shilling if measures delivered very visible returns to wildlife.

“Carefully managed arable fields with margins can be as productive for wildlife as any amount of fairly barren old Cotswold grassland. For example, the way many of us farm nowadays, with precision application of crop nutrients and targeted pesticide applications, based on disease and pest thresholds, makes farming more responsible in terms of the environment than it ever has been before.

“Surely it’s better to target areas of real value to biodiversity, or develop wildlife corridors between these areas, than removing big acreages from production. For example, if it came to ploughing up some of the land currently in arable reversion, if I could plough 80% of it and leave 20% of really special areas with a mass of biodiversity, that would seem better all round.”

Mr Henson says he increasingly wants to integrate information about modern, precision food production into the visitor experience at his Cotswold Farm Park.

“At the moment we don’t put a lot of stuff about agri-environment scheme work in front of them – our rare-breed livestock conservation is obviously more visible. But I feel we are missing a trick and we want to develop a ‘power zone’, explaining how satellite navigation, variable-rate fertiliser and yield-mapping on the combine contribute to modern, efficient food production.”

“The Higher Level Scheme, if it’s still in existence when our ESA comes to an end in August 2014, would be very attractive. Because we’ve been in an ESA for so long, and we have such a variety of habitats on this farm, I don’t anticipate any major problems. Personally I would like to go ahead, but from a business point of view, we have to do some serious number-crunching first.”

The 2013-14 reform of the Common Agricultural Policy represents a massive opportunity for policy-makers to re-draw the way Pillar Two – agri-environmental – support – is delivered. “As farmers we have to be able to justify to the taxpayer what we receive. In this country there are lots of opportunities for conservation and environmental management. The devil is often in the detail.”

Wide-ranging blueprints, introduced across millions of acres, often fail to deliver and miss opportunities, he says. Instead, if a new generation of agri-environment schemes arrive under a reformed CAP, bespoke management plans for individual farms, based on the habitats they offer, could deliver greater benefits to biodiversity. That, surely, would be more sustainable than acress of unproductive set-aside.

He is a customer of Lloyds TSB Agriculture and is their 2011 farming ambassador, working with them to promote a better understanding of financial and environmental sustainability in a farm business context.

In this role Mr Henson will attend a number of events, including the Scotland Beef Event, Beef Expo 2011, the Cereals Event, the Royal Highland Show, the Royal Welsh Show, the Dairy Event and the South West Dairy Show. He will be pleased to meet farmers and rural professionals on the Lloyds TSB Agriculture or Bank of Scotland stands at these events.