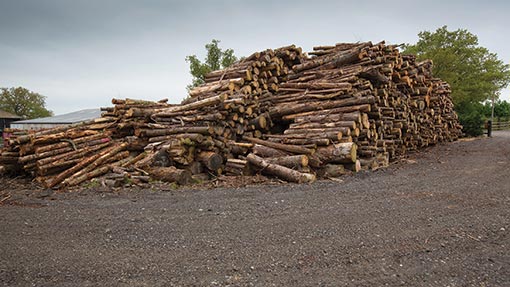 Plans to double Europe’s use of crops and wood for fuel will require land equivalent to three times the size of the UK, according to scientists.

A report by Vienna University found that doubling bio-energy use to meet EU targets of sourcing 20% of Europe’s power from renewables by 2030 would leave a land footprint of more than 70m ha.

While the global footprint from EU energy demand in 2010 equalled land totalling the area of Sweden, researchers said meeting policy targets would require bioenergy crop production to increase by almost a third – equivalent to an area the size of Poland.

The report, which set out to calculate the land footprint of EU bio-energy, said that by 2030 biomass was expected to account for 40m ha of land, biofuels for 11m ha and bio-energy crops for about 19m ha.

Commissioned by Friends of the Earth, the report said increasing bio-energy demand could result in indirect changes in land use in order to support domestic production of biomass crops.

These effects, combined with increased global competition for land as more of it was put into energy production, meant the EU needed to create policies that promoted sustainable land use, it added.

“Demand for bio-energy in the EU has been driven largely by political targets and subsidies,” the report’s authors said.

“If biomass energy is politically targeted to supply a strategic share of the EU energy mix, the land footprint related to EU bio-energy would have to increase dramatically, causing much greater competition with other land uses and other regions.

“As well as the land resource use implications of expanding EU bio-energy demand, the lack of sufficient sustainability safeguards and adequate measuring and monitoring systems for bio-energy prevents an adequate protection of the environmental impacts worldwide.”

Ariadna Rodrigo, Friends of the Earth Europe resource use campaigner, said the increasing use of crops and wood as a fuel threatened rural communities and food production across the world.

“Europe’s hunger for land and natural resources is unsustainable,” she added.

“We need to cut the vast amount of land used by the EU by setting enforceable targets that reduce our over-consumption.”