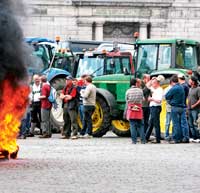 The European Milk Board, representing milk producer organisations from eight European countries, has announced a “far-reaching revolt”, including farmer blockades of dairies and the withholding of milk from the market.

At a press conference in Paris on Thursday (10 September) the EMB said “enough is enough”. The EU Commission’s policy of buying butter and skimmed milk powder into intervention had cost taxpayers millions of euros, but had not raised prices to milk producers.

“For months, countless families have been fighting for the survival of their farms across the European agricultural landscape, and all the European council and the EU Commission have done is to spend a fortune on unsuitable measures and blindly pursue their policy of deregulation,” said a statement.

Instead, the EMB advocates cutting milk quotas progressively, until the supply of milk is tight enough to force processors to pay prices that cover the cost of production.

President of the French Association of Independent Milk Producers, Pascal Massol, said his members would resort to any measures necessary to achieve these aims, while German president of the EMB, Romuald Schaber, said he would suspend his milk supplies immediately.

These views were supported by representatives from the French Organisation of Milk Producers, the German Dairy Farmers Association and the Austrian dairy farmer body IG-Milch.

Small producer organisation, the European Co-ordination Via Campesina, applauded the action and encouraged its members to join in with blockades of dairies, milk powder factories and storage centres “to prevent the strike being broken by selling excess stock”.

“Production has to be reduced by the percentage necessary to balance the market and increase prices for producers,” said a statement.

For a Farmers Weekly view on the dairy crisis in Europe, see Phil Clarke’s Business Blog