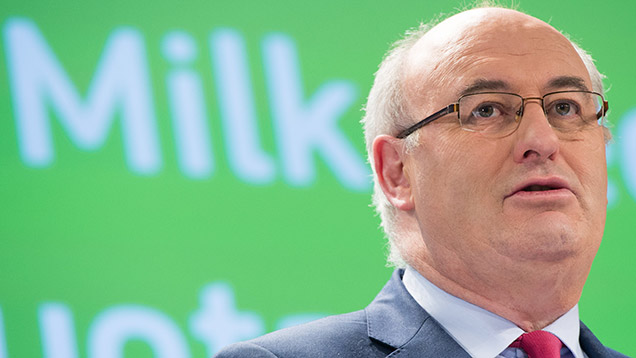 The European Commission will extend emergency help for crisis-hit dairy farmers, after Russia rolled on its trade ban for one more year.

Under intervention, authorities can buy up dairy products to ease the pressure on price from a glut, while private storage pays companies to keep goods off the market.

But Mr Hogan has turned down calls to raise the butter and skim milk powder intervention price, which works out roughly as 21 cents/litre (15p/litre).

This is far below May’s average EU milk price of 30 cents/litre (21p/litre), which is causing farmers across the Continent to lose money.

Speaking outside a meeting of farm ministers, Mr Hogan said he was glad to respond to politicians’ concerns.

“It is important we are proactive and we are continuing to support producers who will obviously have a difficult time arising from this product ban again in 2015 and 2016,” he said.

He turned down a request by Austria for the commission to reopen private storage for pigmeat, which ran for eight weeks from March.

Almost three-quarters of that total was spent on fruit and vegetable private storage, with €53m (£38m) going towards the dairy sector and €17m (£12m) on pork.