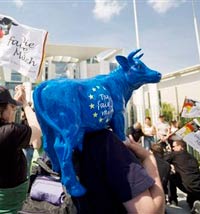 Another mass demonstration by EU dairy farmers is planned for next week in Strasbourg, as milk prices continue to come under pressure.

Organised by the European Milk Board, several thousand farmers are expected to attend from many member states, demanding an immediate 5% cut in milk quotas.

The demonstration is designed to coincide with the monthly meeting of the European parliament in Strasbourg on Tuesday (14 July).

In an attempt to shore up dairy markets, the EU Commission this week proposed to extend the period for intervention buying of butter and skimmed milk powder from the normal end of August close until the end of February 2010.

The EU Commission has also decided to extend the private storage aid scheme until the end of February to try and stabilise the market. There are currently some 110,000t of butter in private storage.

But so far the EU Commission has resisted all calls to cut milk quota, arguing that EU production is already way below milk quota and cuts will not make any difference to actual supply.

Ulster Farmers Union dairy vice-chairman Andrew Addison welcomed the move. “Finally we are beginning to see a reaction in Brussels to the dairy crisis,” he said “The EU Commission has increased export refunds on two occasions, and the French and German governments are now urging the commission to suspend planned increases in milk quota.”