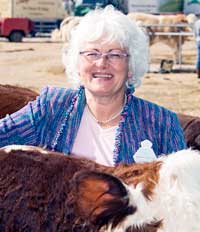 Addressing EU agriculture ministers in Luxembourg on Monday (19 October) she said the money should be available for under the Article 186 “disturbance clause”, which allows the Commission to step in at short notice when markets collapse.

What the money might be spent on was subject to further discussion, though it should benefit dairy farmers directly, she said. “At this stage, I can only say that private storage for different products, including cheese, is a candidate.”

The money would first have to be approved by EU finance ministers who meet on 19 November, Mrs Fischer Boel added. “Needless to say, if this allocation of €280m is approved, my purse for 2010 is totally empty.”

The move was welcomed by EU farmers’ group COPA, which said it would help farmers survive a period in which prices have slumped by 30%.

“But the EU commission’s action does not go far enough,” said COPA president Padraig Walshe. “Many producers across all farm sectors are facing major difficulties. Further market measures must be introduced to prevent a further exodus from rural areas.”

The comment followed a meeting in which EU farm ministers debated a series of proposals put forward by 21 member states, led by France and Germany.

This document sought an extension of intervention purchasing to include cheese, additional funding for school milk schemes, more targeted export assistance and subsidies for skimmed milk powder to be used in animal feed.

It also called for measures “to encourage a fair and balanced relationship between producers, processors and retailers”.

Mrs Fischer Boel said many of these issues were being dealt with already. For example, the new High Level Group had met for the first time last week, looking at supply chain relationships.

She also pointed to new proposals to tweak the quota management rules, so that superlevy would be triggered more easily in member states producing too much milk.

But she rejected calls to subsidise the inclusion of SMP in animal feed. “I have not received any convincing analysis that this would increase demand.”

The EU commission expects to spend about €600m on intervention purchasing and export refunds in the dairy sector in 2009.