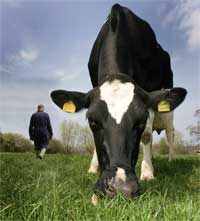 Dairy farmers are less positive about their business prospects than their beef and sheep producing counterparts because of falling profit and higher levels of outstanding investment, according to a Farmers Weekly survey. 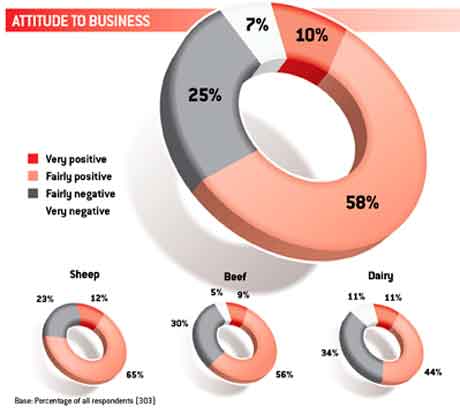 The survey, carried out in conjunction with the Royal Association of British Dairy Farmers, revealed that, overall, confidence among livestock and dairy farmers was running high. Of the 300-plus farmers who took part, 68% described their attitudes to their businesses as either “fairly positive” or “very positive”. 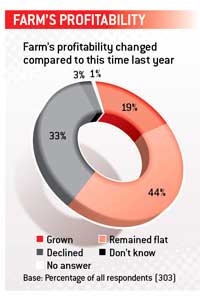 A variety of reasons were given as to why they felt this way, but the majority (79%) said they still enjoyed farming, while almost half (43%) said they liked the challenge.

But roughly a third of the farmers (32%) said they were more negative about their businesses, and of this group, 72% said it was because they could not make a profit, and 22% said too much change was required.

Despite the relatively upbeat picture that emerged, there were significant differences in farmers’ attitudes according to the type of production they were involved in. For example, 77% of sheep farmers said they were either “fairly” or “very” positive about their businesses. But this fell to 65% for beef farmers and just 55% for dairy farmers. Conversely, mixed farmers were the most optimistic, with 82% saying they felt positive. 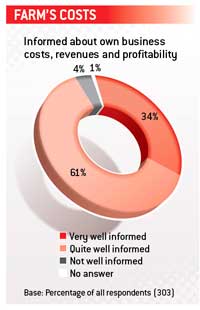 Probing a bit deeper, it was easy to understand why dairy farmers were feeling less optimistic. While, for the survey group as whole, a third of farmers said their profit had declined over the past 12 months, for dairy farmers this came to more than half (52%). In contrast, just 7% of sheep farmers had experienced a profit fall, as had 32% of beef farmers.

Dairy farmers also faced the highest level of investment in the next few years, which was fuelling their more pessimistic outlook. For example, 38% of milk producers were looking to spend more than £30,000 on their businesses (particularly in response to new nitrates rules), compared with 33% of beef farmers and 16% of sheep producers. 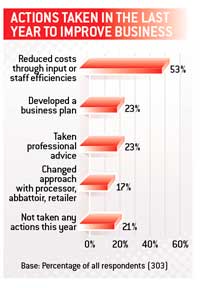 But while dairy farmers are feeling the pinch more than beef and sheep producers, the survey revealed that they are the most proactive group at facing up to their problems. For example, more than half had looked to reduce costs through input and staff efficiencies over the past year, while 37% had taken professional advice and 28% had developed a business plan. This was more than beef or sheep producers had done.

In contrast, beef and sheep producers appeared to be better informed about their business costs and revenues, although for all three farm types, the level of knowledge was high, with 95% describing themselves as “quite well” or “very well” informed. 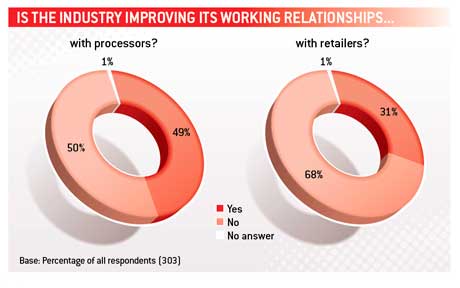 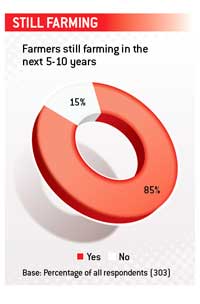 As well as the differences in attitude by business activity, there were also significant variations according to length of time farming and between owner-occupiers and tenants. For example, farmers who had been in business for less than 10 years were typically more optimistic than those who had farmed for more then 10 years. And owner-occupiers were more optimistic than tenants.

The group was also asked whether they would still be farming in five to 10 years’ time, and it was encouraging that 85% said they would. Here, there were few differences between all the categories, although looming retirement and lack of profit were the main reasons for quitting.

The survey also looked at the challenges that lie ahead. Not surprisingly, making a profit and dealing with red tape were seen as the greatest challenges.

Asked if they could change one thing in the next year, beef and sheep producers favoured a cut in red tape, while dairy farmers wished for better prices. 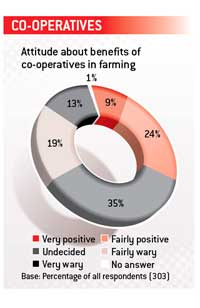 But dairy farmers were even more polarised than either beef or sheep producers, with 41% describing themselves as “positive” towards co-ops and 32% wary.

According to the survey, 17% of dairy farmers said they were “very” wary of co-ops, compared with just 8% of beef and sheep producers. It seemed the demise of DFoB and the fact co-ops often pay a lower milk price had affected dairy farmers’ views