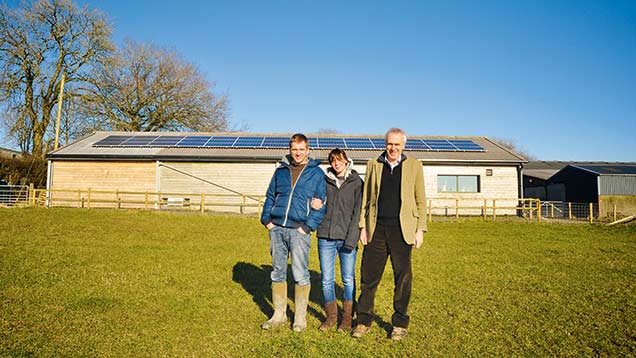 A 10kW roof-mounted solar PV system fitted to the south-facing roof of a cheese dairy at Patrick Holden’s 52ha organic farm, about 10 miles from the Ceredigion coast in west Wales. The array is made up of 42 Trina panels, Hilti rail and Sunny
Tri-power inverters.

The project cost about £25,000 in total, which included all equipment costs, installation and strengthening to the existing roof.

Mr Holden says he had been thinking of installing solar for some time, but the impetus to go ahead came when the government announced plans to cut Fits from December 2011. “We rang Southern Solar as soon as we heard and they managed to complete installation just before the reductions came into force. It took just three and a half days to fit the system.”

The array has a predicted annual energy yield of 8,322kWh and Mr Holden says it has met expectations. “It’s been fault-free so far.”

There have been no costs in the first three years of operation, although the panels may now need cleaning.

The site qualified for the higher Fits rate of 40.83p/kWh and Mr Holden says income from the Fits and electricity exported to the grid (worth 3.3p/kWh) has totalled about £8,000 since installation, plus there have been additional savings from electricity used on site.

“We initially worked on a 50:50 split between on-site use and export, as the peak demand in the dairy is generally during the middle of the day when the panels should be generating the highest output.”

Mr Holden says the project will pay for itself in five to six years, although the repayment period for the bank loan is over a slightly longer period.

Installation was straightforward, although a structural survey of the building’s roof prior to installation deemed it unsuitable for additional load from the panels, so the steel Z-purlins had to be reinforced with timber.

Installation and commissioning of the system also had to be carefully planned around the activities of the dairy farm and cheesemaking, especially as the electricity had to be turned off temporarily.

“The whole process actually turned out easier than we expected,” says Mr Holden. “The most difficult part was taking the decision to go ahead in the first place.”

No particular advice stands out, however Mr Holden says it would have been useful to get more integrated renewable energy advice that could help tailor the most appropriate technologies and/or energy-saving measures to the specific characteristics and needs of the farm business.

“We’d have liked to put a larger capacity solar PV scheme in and had the roof space to do so, but were limited to 10kW by our single-phase supply. It would be better if the cost of upgrading power supplies could be shared between landowners and power companies, especially as farms of the future will be key sources of renewable energy generation.”

“Make sure you’ve got a decent roof structure that can support panels for 20 years or so, and ideally it needs to be roughly south-facing. Do the maths carefully on the payback, because even though the Fits have fallen, so too has the cost of the equipment. Installing solar PV is certainly the right thing for farms to do, as it saves money, generates income and reduces greenhouse gas emissions.”

“There’s not much I can say against what we’ve done. I only wish we hadn’t been limited by our single-phase supply and could have put a larger system in.”