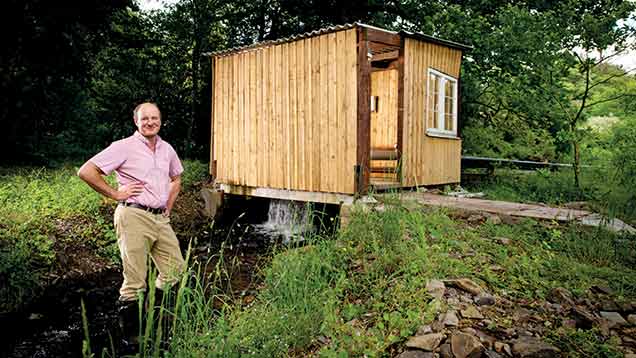 One of the best ways to assess whether a renewable energy investment would work on your farm is to talk to others who have been through the process.

Paul Spackman quizzed five farmers who have been generating renewable energy for at least a year to hear their experiences and get their tips for others considering entering what is still a relatively new sector.

A 20kW Hydrover turbine, built in 2010-11 close to the farm at Auchencheyne, Moniaive. The system is one of three hydro schemes on the farm and is fed by a catchment of 500ha of moorland, with 1,600mm annual rainfall. There is 46m of head (fall) from the intake to the turbine and 1,200m of pipe. Average flow rate through the turbine is 40 litres/sec.

The project was self-financed through a bank loan.

It took nine months from the initial decision to generating electricity, although Mr Gourlay says schemes may take longer now due to more regulation. “Hydro isn’t as visually obtrusive as something like a wind turbine, so planning isn’t a major issue. The fish and ecological surveys were relatively straightforward and, on the whole, we found our local officers to be very proactive.”

“Better than expected,” says Mr Gourlay. The 20kW system runs at full capacity for about 70% of the year and from November to March last year it ran at 100% every hour during that period. But that is offset during dry periods, such as this July/ August, where it did not run at all.

Annual maintenance costs are negligible provided components do not break, Mr Gourlay says. Generators are guaranteed for 20 years, so the main cost is remedial work to intake areas after heavy rain and cleaning of intake screens and pipes. Screen cleaning is weekly or fortnightly, depending how much debris is in watercourses, while cleaning deposits from the inside of pipes has to be done every couple of years.

Annual electricity production is 85,000kWh. The total Fits for generation and export is 26p/kWh, giving an income of £22,100/year, plus additional savings from displacing own-use power.

“Finding the right hydro engineers to build the project properly. Working with the Scottish weather was also a big challenge.”

Digging trenches for pipes was easier thanks to not hitting rock, which could have significantly added to cost and time.

“Weld sections of pipe together on the flat before digging the trench. If you don’t, heavy rain can scour out and deposit materials, all in the wrong places.”

Not really, although Mr Gourlay says the intake pool may be tweaked to reduce the risk of damage during heavy rain.

“Unlike other renewables, every hydro system is unique, which makes comparisons of costs difficult. Pipes, for example, cost £30-40/m, which can soon add a lot to a project, so make sure it’s well designed. During construction you’re constantly battling the elements, so be prepared to go when the weather is right.

“Grid connection can be tricky, so if you get an offer from a DNO then take it, although there is no leeway on negotiating their price.”

Some issues with damage to intake area after heavy rain prevent it getting a full 10.