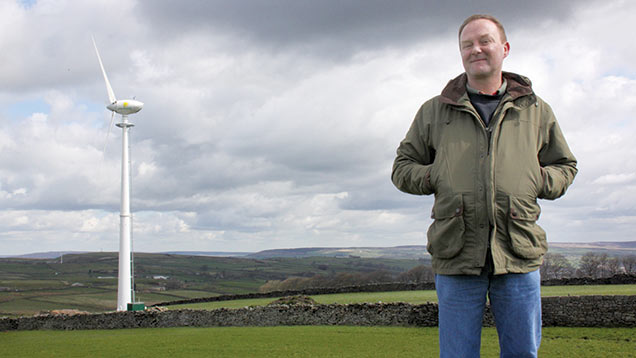 Project overview
A 50kW Endurance E-3120 wind turbine installed by Earthmill two years ago on the family dairy farm at Oakworth, near Keighley.

The turbine is located in a grazing field 500m from the farmstead at a height of 345m above sea level. The average wind speed at the site is 6.5-7m/sec.

Ownership
The turbine is owned outright, financed through a Yorkshire Bank loan secured against the ability of the existing business to repay the loan without any income from the turbine.

Timescale
Mr Sharp first considered a wind turbine after attending a Kite/Asda Dairy Link meeting. It took almost a year of research and planning before the deposit was paid in July 2011. It took two months to get the go-ahead from the bank prior to paying the deposit.

Planning permission was granted on 26 October and installation began on 18 November 2012, with the project commissioned nine days later.

Performance
The initial desktop survey predicted an average wind speed (using the national wind speed database) of just 5.8m/s and annual energy generation of 169,000kWh. But actual wind speed at the site turned out to be much higher and generation averages about 230,000kWh.

Mr Sharp says September 2014 was the lowest performing month since commissioning, but the turbine is still one of the top three installed by Earthmill.

“Do your homework and talk to as many people as possible who have been through the process, as everyone will have had a different experience. Take independent advice, even if it is only to advise you which turbine is best for your site and which installer to use.”
Jonathan Sharp

Income and payback
About 90,000kWh of the total generation is used on-site to power the parlour and farmhouse. That value, combined with Fits payments and sale of surplus electricity to the grid, should mean the project has a payback of about four years.

On-site electricity use will be increased with the installation of a robotic milking parlour for the farm’s 125 pedigree Holsteins this autumn.

Most difficult part
Planning permission. “We are close to a moor with a special protection area designation,” says Mr Sharp. “We had to do a bird survey that could only be done in the breeding season, which we had missed for that year, so we had to withdraw from planning and wait a year. Annoyingly, the bird Natural England was worried about was the golden plover, which I can legally shoot in season.
“We also had a scary moment when it looked for a time like the planning was going to the local planning panel and we may have had go ahead with the grid connection without having got planning, risking almost £20,000. In the end we managed to get planning without it going to panel.”

Easier than expected
Installation was “far easier” than Mr Sharp imagined. “No groundworks were started until we had planning. A 200m-long road and hard-standing for the crane had to be constructed before anything else could start. I used my farm contractor for this, which was brilliant and also practised as the company had erected its own turbine three weeks before.”

Most useful advice
Earthmill gave Mr Sharp his most useful advice, which was to apply for grid connection before planning was obtained. “If we had not done that, we wouldn’t have got the turbine up before the Fits cut in December 2012, which could have meant about £150,000 less in Fits payments over the project’s lifetime.
“It can take three months from you paying for the grid connection to it happening. The money is refundable almost up until the last moment if you don’t get planning.”

Advice to others
“Do your homework and talk to as many people as possible who have been through the process, as everyone will have had a different experience. Take independent advice, even if it is only to advise you which turbine is best for your site and which installer to use.”

Rating: 9/10
The main downside was the planning, Mr Sharp says. “People think you can just throw up a wind turbine, but with the sums of money involved it’s not that simple. I can thoroughly recommend everyone else involved in the project.”