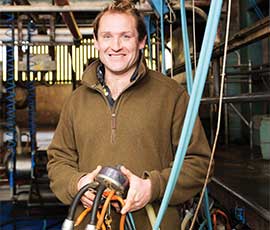 Following an energy audit on our two focus farms, the latest article in the Energy Challenge series finds some surprising results.

Carrying out a farm energy audit can yield significant savings, with some simple changes able to slash electricity costs by a third. But the results can be unexpected, as Sussex dairy farmer Tom Gribble discovered when we carried out an energy audit at his farm.

In common with many other dairy producers, Tom thought lighting would be his greatest energy cost. But it actually makes up less than 4% of his energy outlay, with water heating accounting for 40% and milk cooling 20% – lower than average due to the use of two plate coolers to achieve rapid temperature reductions.

“The average across all dairy farms is a split of 30% each for heating and cooling and 15% for vacuum pumping,” says Gateway energy consultant Jon Swain, who carried out the audit for E.ON. “Lighting and other miscellaneous costs make up the remainder, which at this farm runs to just £270/year.”

At Charleston Farm, Firle, Jon identified a number of key areas where energy can be saved. “Tom can make some big savings just by putting timer switches on to his water heaters, so they run during the off-peak period,” he says. With an outlay of £20-30 to install a switch, he could save £173/year.

Moving the parlour wash heating to Economy 7 would save another £706/year. “You could wash down with cold water in the afternoon, or install a second water tank to provide enough hot water for two milkings, both heated overnight on the lower tariff.”

Another low-cost action is cleaning off the condenser coils more frequently, and improving the refrigerating ventilation to aid heat exchange, says Jon. “You could save £206/year just through better airflow around the coils.”

Options that will cost more, but still have a payback of three to eight years respectively, are to install a heat-recovery unit on the milk cooler, and variable speed drives on the vacuum pumps. “A heat-recovery unit will cost about £2,500-3,000, installed, and reuses the energy used for milk cooling to heat the water for washing,” he explains.

“As well as saving 10,000kWh in heating costs it improves milk cooling efficiencies by 10%, so it’s the ultimate win-win.” Variable speed drives, at a similar capital outlay, will reduce vacuum energy usage by around 13,500kWh, or £616/year.

In total, Tom could therefore reduce his energy bills by 31% – almost £2,000/year. Installing larger water tanks to reuse plate cooler water would yield an additional saving of £786/year. “I know we use a lot of water, but I am amazed at how much we’re spending on water heating,” says Tom. “I suppose you just switch everything on and if it works you assume it’s all right – but it’s the hidden things that cost and are very easy to overlook. It will be nice to save a bit more money so we can reinvest it into the farm and improved cow comfort.” 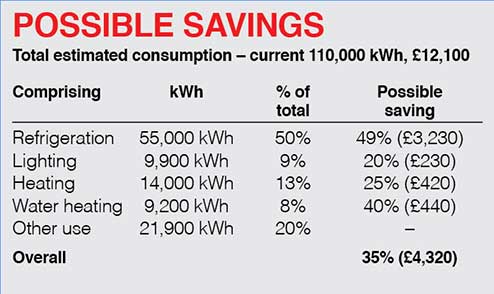 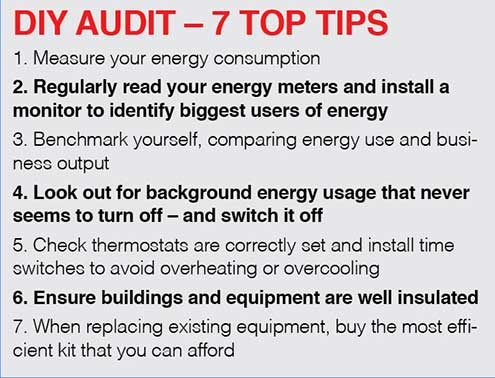 One of Jan McCourt’s biggest energy problems is that he doesn’t have a firm idea of where his electricity is being used at Northfield Farm. But his suspicion that refrigeration used for meat processing and the farm shop would be the greatest consumer proved correct, especially as many of the units were second-hand when he installed them in 1997. 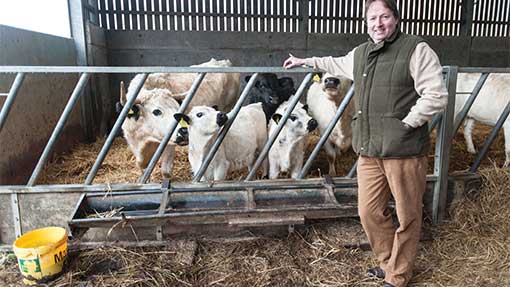 “Thermal imaging on some of the old freezer equipment shows that condenser heat is finding its way in to the surrounding core of the device,” says Gateway’s Andrew Kneeshaw, who carried out the audit. “Generally, freezer equipment over 15 years old will be 60% less efficient than new class A++ equipment, so it makes sense to upgrade.” Older, average-sized freezers cost £70-90/year each to run – replacing them, at a cost of about £250 each, would slash that by £40-50 per freezer.

Jan could also make substantial improvements to the walk-in freezer, says Andrew. “It was operating constantly, because the internal coil was heavily iced and the door seal was ineffective.” He recommends using a fridge service specialist to upgrade the refrigeration system and control, and to examine the insulation and sealing. “Annual running costs will be about £1,800 at the moment – refurbishing the unit should reduce this by about 50%.”

In the shop, the refrigerated display units could also be improved, he adds. “The condenser units need better venting and cowling, so they work more efficiently.”

Hot water use is high on the farm, with two water heaters running largely on day-rate electricity, costing around £750/year. “Increasing the size of the water heaters to 200 litres each, and heating with night rate electricity would save about £300/year,” says Andrew. Recovering heat from the refrigeration system to preheat water would halve hot water costs, with solar thermal pre-heating being another option.

Lighting on the farm is reasonably efficient, with metal halide and high-pressure sodium bulbs used in the large buildings. However, Andrew recommends converting tungsten and tungsten halogen lighting to compact fluorescent or good quality LED lights.

“Fluorescent lighting could be upgraded to electronic ballasts at cost of about £60 each, reducing annual running costs by £4-10 each,” he says. “But lamps used less than 100 hours a year are probably best left to fail before replacing.”

In the pig shed, Jan uses a 300W heat lamp to keep the piglets warm, 24 hours a day for about six weeks. “With two litters a year and nine sows, one might expect one or two lamps to be used most of the time, costing £250/year,” says Andrew. “Jan may consider covering an area for the piglets and using a dimming controller to give the required temperature, saving about 50% a year.”

Finding the culprits of energy use has been extremely enlightening, says Jan. “There are some things, like the fridges, that we just can’t do without, but it’s surprising how quickly we could get our money back by replacing them – and how simple management changes can make such a big difference.”

All figures based on farm audits carried out by Gateway

E.ON customers can get a free energy monitor by logging into their online account and requesting one.

They can also call Gateway for free advice on how to reduce energy usage on 0345 301 4889, or complete the online form to request a call back.