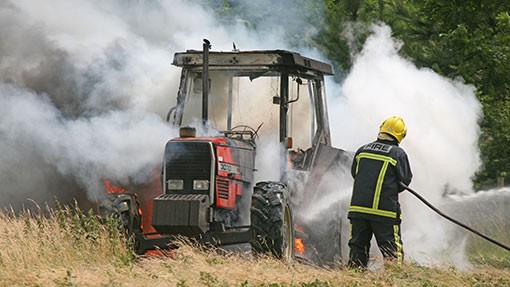 The cost of insurance payouts for commercial fires has topped £40m in 12 months, according to NFU Mutual figures.

The rural insurer’s latest data show that a total of £43m was paid out in 2012 with the average claim of £26,472. The main causes were arson, electrical faults and fires in commercial vehicles.

NFU Mutual commercial development manager Georgina Farndon warned farmers that a major fire could have a devastating impact on the long-term future of a business.

“Research suggests that 80% of businesses which suffer a major incident such as a fire fail within 18 months. Firms need to have a business continuity plan and know how to deal with what happens after a fire. Many are simply not equipped to survive after a major catastrophe,” Ms Farndon said.

“It’s not just physical assets, such as premises and equipment, which are at risk from fire – the loss of data can be equally devastating for a business.”

The outbreak of fire is arguably one of the biggest risks to any business and rebuilding a business can take months, if not years, she said.

Many business owners neglect to consider how the business might continue to function while premises are repaired or rebuilt and new stock and machinery are purchased, she added.

Reducing the risk of fire

You are legally required to carry out an assessment of the risk of fire within your premises and the precautions you have in place, under the Regulatory Reform (Fire Safety) Order 2005.

To do this, you need to: