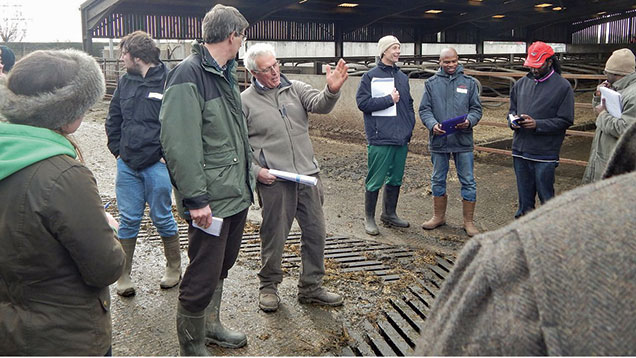 If fresh thinking is what’s needed in your family farming business then hosting the Farmplanner of the Year competition could produce the ideas that will take things in a new direction.

At the Yennards Farm in Leicestershire, changes are already well under way following this year’s competition.

Teams were challenged to find a way of bringing Geoff and Angela Jones’s daughter Clare back to the 371ha farm business through a food-based diversification, as well as assessing the investment, cropping, land management and staff issues raised by expanding the 320-cow dairy herd by 100 head.

A long-term succession plan was called for and the arable business run by son Graham also needed development.

Kingston Maurward’s winning team proposed a paneer cheese venture, alongside extending the parlour, slurry store and cubicle housing. The arable enterprise would lose ground to the dairy expansion but contracts would be sought on additional land.

“We’ve gone ahead with expanding the cow numbers, increasing the autumn group by 30-40 cows and will be at 410 to 420 head once the heifers are calved,” said Geoff Jones. Some of the arable ground has gone into grass and more pro-active efforts are being made to secure contract farming agreements. The cheese venture is a longer term plan as Clare works off the farm.

The whole family thoroughly enjoyed hosting the competition, said Mr Jones. “The efficient family farm is the core of British agriculture and anything that makes any business stop and think, that’s a good thing. In addition, it makes the next generation stop and think too.

“You’re getting access to some of the brightest people – you could be getting what in a few years’ time you would be paying for!”

The judges were particularly impressed by Kingston Maurward’s sensitive treatment of the succession issue at the Yennards Farm.

Farley Farms in Berkshire is developing a nursery as a result of hosting the competition in 2012. Among other challenges set by the mixed arable and dairy estate,  a profitable use had to be found for a set of traditional buildings, but there were limitations.

“We had never considered a nursery. I don’t think we would have come up with the idea ourselves but we were happy to respond to the thinking of the competition winners,” said estate manager Mark Robins.

Where do I find out more/offer to host?

If you would like to give students the chance to test their mettle on your farm business or estate, please contact IAGRM director Richard Cooksley on 01275 843825 or enquiries@iagrm.org.uk.

The winning team’s thoroughly researched plan was for an established nursery business to rent the converted buildings on the 708ha farm. A recommendation to move away from contract management for the dairy herd was also followed.

The competition has run for 25 years and tests the students, giving them a very valuable opportunity to look at a real farming business and make recommendations that could well be taken up, said Richard Cooksley of IAgrM.

Farmplanner of the Year – how does it work?