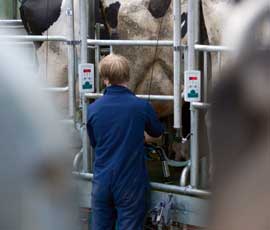 Farmers are preparing to target supermarkets and dairy processors who refuse to reverse price cuts that have wiped £50,000 of dairy farm incomes.

An unprecedented meeting of farming unions on Thursday (5 July) called for the immediate reversal of milk price cuts that have been imposed on farmers since 1 April.

The meeting brought together the NFU, NFU Scotland, NFU Cymru, the Tenant Farmers Association (TFA) and Farmers for Action.

Representatives from all five groups called for all milk price cuts imposed on farmers since April 1 to be restored by August 1.

The unions have also called on farmers to show their strength of feeling by turning out in force at a crisis summit in London next Wednesday (11 July).

The plan is to leave retailers, MPs, processors and the public in no doubt about the scale of the problem facing dairy farmers.

The summit will tackle the need for retailers working with processors to take responsibility for a sustainable supply chain which returns at least a cost of production for dairy farmers.

A joint statement said: “The catastrophic cuts will drive farmers out of the dairy industry and we are united in our demand for an immediate reversal of recent and planned cuts.

“There has been an unprecedented outcry of anger and frustration among farmers. We want to harness that strength of feeling and bring together farmers from across England, Scotland and Wales to express their feelings in London next week.

“Farmers have told us they will do whatever it takes to stand up against these cuts – Wednesday’s summit gives us that chance.

“There is a window of opportunity between now and August 1 to progress a robust voluntary code of practice, however, we will also be exploring a regulatory solution from government.”

A statement on the Farmers For Action website said processors had until 1 August to confirm that they would reverse cuts that have seen up to 4p per litre knocked off farmgate milk prices.

“If not they will need to nofity their retail customers that milk distribution will be seriously disrupted,” it said.

Have your say and vote in our poll