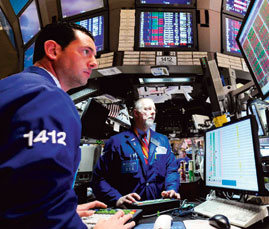 Plans to limit speculation in commodity markets could be approved by 20 of the world’s leading agriculture ministers later this month.

“We need investors not speculators – we do not need people who come and make excessive profits in a few days in agricultural markets,” said Mr le Maire, commenting that in Chicago, more than 80% of positions were held by purely financial players who had no link with production agriculture.

“We don’t want to control prices. What we want to fight is not higher prices but excessive volatility.” Strategic emergency food reserves would also be part of the plan.

Addressing the challenges of world food security and price volatility, this year’s French presidency of the G20 has developed a five-point action plan for agricultural markets (see panel).

However, grain traders at the conference were generally opposed to limits on speculation. “The best markets are unregulated and allowed to perform in a free manner,” said Frontier’s trading director Jon Duffy.

“The markets are where they are today because of pure supply and demand,” he told Farmers Weekly.

“Speculation may make it get there quicker but I would be fairly wary of anything that’s going to limit the free market; I don’t believe it’s good news for anybody. Controlling speculation won’t alter food security.”

Moves to limit speculation were roundly rejected by other speakers at the International Grains Council conference.

“The markets are not perfect but at the end of the day signals given out by the market are better than those given out by governments,” said Rod Gravelet-Blondin, senior general manager of commodity derivatives at the Johannesburg Stock Exchange.

In a similar bid to that of the G20, an EU review of financial regulation is also considering market intervention by limiting the size of positions which can be taken on commodity futures markets.