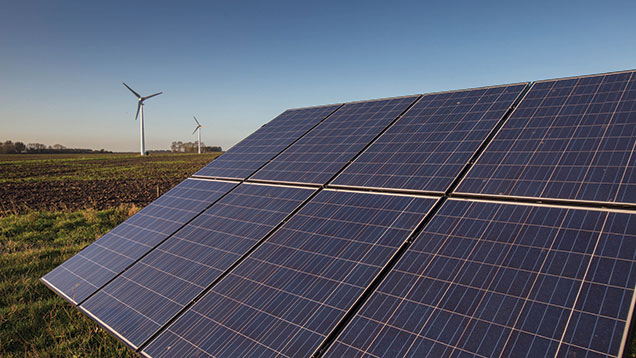 Battery technology has come a long way over recent years, but with costs still stubbornly high it is so far a viable option only in limited circumstances. Paul Spackman reports

There is often a mismatch between peak power output generated and electricity demand, resulting in excess power being exported to the grid at a lower price than it is subsequently bought back for. Balancing this supply and demand with batteries can maximise on-site energy use and improve the returns from any renewables installation.

But the cost of battery storage is still prohibitively high for many to justify, says Jon Swain from the Farm Energy Centre (FEC).

A typical lead acid battery system capable of delivering 25kWh of useful energy a charge, for example, will cost about £25,000 to install. Assuming an average battery lifespan of 2,500 full charges (62,500kWh in total), that equates to a cost of 40p/kWh, which is well above the cost of buying power at 11-12p/kWh.

There is a similar picture for more efficient lithium-ion systems, which although last longer (about 4,200 charges), cost more at nearer £37,000 for an equivalent sized system (35p/kWh), he notes.

“Often it’s not the cost of the battery that’s the issue, but the cost of installation and associated electronics, particularly the inverters needed to convert direct current to alternating current.”

Can batteries be made to pay?

While the cost of battery systems is high, they are expected to become more affordable over the next few years and in the meantime, there are situations where they could be worth considering.

Monitoring electricity supply and demand throughout the year is key to identifying whether there is enough surplus power to warrant a battery system. It is also vital to maximise on-site use at times of peak generation by other means first, such as using timer switches, changes to heating or cooling routines, and other energy efficiency measures, he says.

The optimum battery system depends on the amount of power available and charging capacity, together with the total power demand and how quickly this is discharged. Lighting systems have relatively low, steady power requirements for example, while vacuum pumps have a much greater demand and rapid discharge time.

“Battery capacity has to be bigger than the energy requirement, as only a certain proportion is useful capacity,” says Mr Swain. “For lead acid batteries, that proportion is about 50%, while lithium-ion batteries are nearer 80%.”

The “C” rating of batteries shows how quickly power is discharged. C1 batteries for example will discharge all available power over one hour, while C10 batteries discharge it over 10 hours. “Battery capacity is seriously reduced with quicker discharge times though.”

Dan Gladwin from the University of Sheffield’s electrical engineering department says a key factor affecting battery performance is depth of discharge (DoD) – how much power is used out of the battery each time.

“To achieve equivalent cycles from a lead acid battery you have to reduce the DoD to about 30%. Therefore to extract the same amount of energy from a lead acid as with the lithium-ion, the lead acid would need two-and-a-half times larger capacity to get comparable life.”

New lithium-titanate batteries typically have a lower power density and lab tests have given life cycles 15-times greater than lithium-ion, he notes.

Cheaper battery systems based on reconditioned lead acid car or van batteries may work in some cases where there is relatively low DoD (for example running a few lights), adds Mr Swain, but are unlikely to be suitable for higher power requirements.

The flexibility of batteries to give an immediate response (within 100 milliseconds) to increased power demand means that a major future application is as large-scale back-up systems to help balance fluctuations in grid supply, Dr Gladwin believes.

Above a certain scale (minimum supply of 5MW for 15 mins) there are opportunities to sell electricity to the grid at variable prices. While this is too high for individual farm installations, he says there could be opportunities for farmers to co-operate to form virtual power plants.

This involves groups of farmers with different renewable installations and separate grid connections jointly selling electricity, so the combined output meets the requirements for variable pricing. This allows a higher price to be achieved for electricity sold during periods of peak demand, which could significantly improve the viability of battery storage, he says.

There could also be scope for more electric-powered farm vehicles to use energy produced by on-farm installations.