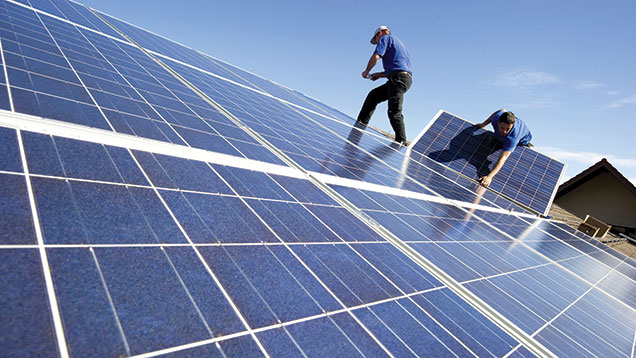 The annual investment allowance (AIA) gives the opportunity to claim 100% of investment of up to £200,000 in the year the expenditure occurs. It is generally available on any plant and machinery bought to use in the business. This includes most renewable energy equipment, subject to the same rules as for other businesses.

However there are some notable exclusions, so it is vital to understand exactly what capital allowances are available when planning any renewables project, as this can drastically alter the payback, says Shirley Mathieson, head of renewables at accountants Saffery Champness.

In general buildings and structures are excluded from the AIA, however it may not always be that straightforward.

A common pitfall is the potentially considerable cost of strengthening roof structures before the installation of solar panels, says Catherine Vickery of accountants Old Mill.

“Panels and their fixings are allowable, but any structural work on the roof itself is classed as an improvement rather than a repair and can’t qualify for capital allowance.”

Farmers and landowners carrying out such work therefore need to ensure their contractor provides a detailed breakdown of costs so capital allowances can be claimed on works that do qualify, she advises.

Another example of where care is needed is for the construction of turbine housing, such as a power house for a hydro scheme, continues Ms Mathieson.

This would normally be included in land and buildings in the same way as any other shed and not eligible for capital allowances. However, the incremental costs associated with it being a power house, such as concrete to support the turbine, should be accounted for as part of plant and machinery and capital allowances are available on this proportion of the spend, she says.

There are other specific exclusions on which capital allowances and AIA cannot be claimed.

For instance, it cannot be claimed on monies spent on a dam, reservoir or barrage, including any sluices or gates, says Ms Mathieson.

The lifespan of the asset is another important consideration where the amount spent exceeds the AIA total, or the AIA is not available to a business. In such cases, the “normal” capital allowances at 18% a year can be claimed on the remaining balance.

However, where an asset is classed as “long-life” (defined as having a useful economic life of more than 25 years), the write-down rate of capital allowance falls to just 8% instead of 18%.

This is of most significance for technologies such as hydro and solar, or anyone claiming Renewable Obligation Certificates, where it is difficult to argue that the expected working life of the equipment won’t be that long, given this is the length of the support scheme.

However, even where the whole project has a long life expectancy, there will be some elements within it, such as the inverters on a solar array, which have a shorter lifespan and will therefore qualify for the AIA, says Mrs Vickery.

“Again, it highlights the importance of separating out costs with long and short life expectancies during the development process.”

AIAs are not available to all businesses, notes Ms Mathieson. For example, “mixed partnerships” where one of the partners is a company cannot claim the AIA, neither can trusts, she says.

Also, where an individual has more than one business or trade that are controlled by the same person and share the same premises then only one AIA is available, she says. “An example of this would be a farmer having an AD plant on his farm. If he has already used up his AIA purchasing farm equipment he will not be able to claim an additional AIA on monies spent on the AD scheme.”