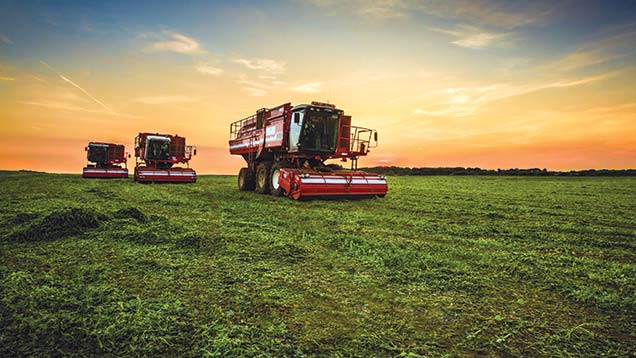 By working together, farmers can save money on supplies, negotiate with more force and hold a greater stake in the businesses they deal with. Yet there’s a lingering feeling that continental producers work together better. In the first of a series, we look at how UK farmers measure up when it comes to co-operation.

It’s often preached that British farmers don’t work together as well as their European neighbours.

For all the on- and off-farm success stories, producers are still told to club together to strengthen their hand in the supply chain.

But the numbers do show UK farmers lagging behind their continental counterparts when it comes to collaboration – at least in a formal way.

Take co-operatives, farmer-owned businesses that aim to deliver the most value possible back to their members by processing and marketing produce or buying-in goods and services farmers need.

In 2013, the UK had 200 agricultural co-operatives, while Germany, France, Italy and Spain each had several thousand.

Even accounting for the size of the nation’s farming industry, the picture is similar. The UK comes bottom of a list of the biggest European farming countries if we measure agri co-op revenue against national farming output. Co-ops are about 10 times more important in Finland, Denmark and Ireland, by this yardstick.

Another route into formal collaboration is the producer organisation (PO), a group exempted from competition rules and so able to bargain collectively with processors on behalf of farmers.

In 2012, the European Commission gave dairy farmers to the ability form POs, but in three years not one has been set up. Dairy Crest Direct, representing 1,200 farmers, could soon be the first.

But, in 2013, Germany had 142, France had 36 and Italy had 32. POs are not the dairy industry’s panacea, but British farmers are still behind those in Europe.

In the fruit and vegetable sector, where POs are more established, the UK has 34.

POs represented more than 40% of UK growers in 2010. But that figure was just below the EU average, and in the Netherlands, Belgium, Ireland, Germany and Denmark, it was above 50%.

Co-ops and POs are by no means the only way farmers work together – producers share knowledge, skills and equipment, run joint ventures and share-farming, and elect farm leaders to voice their views – but they are formal ones we can easily measure.

Data on agri co-ops comes from the 2014 report by European trade body Cogeca, Development of Agricultural Cooperatives in the EU, with assistance from Co-operatives UK. The report covers financial performance in 2013. Information on POs comes from European Commission reports.

The non-profit business owns, operates and maintains the specialist machinery, as well as dealing with Birds Eye on the growers’ behalf. A drilling plan is drawn up each year to allow the best use of resources and a price pooling system means growers are not penalised by sowing date.

Grower Peter Caley, a GPC director, says there was no way growers could do this alone. “We would not be supplying the contract we do without working together. The reason behind doing it was to streamline it and make it more efficient.”

The PO is funded through the Birds Eye contract, while each member has a £1 share to give them voting rights. Regular meetings, an AGM and special member website keep each grower in touch.

“Transparency and good communication are the key,” Mr Caley says.

PMR lets farmers from across south and west Wales make the most of their assets and cut their fixed costs.

Producers with underused machinery can share equipment with farmers who don’t want to invest in expensive kit. PMR, structured as a co-op, acts as the administrator who puts the two parties in touch.

Since forming in 1991, PMR has grown into other activities such as group-buying fuel, seed, electricity and fertiliser, and marketing members’ services for jobs such as snow clearance in winter.

But general manager Neil Davies says the business remains quite simple, employing just six staff. He says the way it puts farmers in touch acts as a kind of “dating agency”.

To pay the running costs, the 900 members pay a yearly subscription of £120 and there is a small levy on each transaction.

Farmers can be elected to a management committee, which keeps the co-op ethos strong.

“The members, especially the founding members, have a sense of ownership,” Mr Davies says.

One of the biggest players in UK grain marketing is owned by the farmers who grow the crop.

In a normal year Openfield markets more than 4m tonnes of grain – about one-quarter of the UK harvest.

Chairman and Gloucestershire grower Richard Beldam says the co-operative structure means no outside shareholders need rewarding. This means farmers can receive marketing advice that is only in their interests, while any marketing charges paid by growers are ploughed back into the business, he says.

Farmers become members of the co-op when they commit grain for marketing, with one grower having one vote. The shares have no monetary value and if a farmer stops selling through Openfield, they are no longer owners.

Mr Beldam says multi-year contracts with customers such as breadmaker Warburtons and feed manufacturer ForFarmers are possible due to the co-op’s scale.

And he says they also reflect the business focus on sustainable success, not shorter-term profit and loss statements.

Over the coming weeks, we will be exploring how farmers work together and asking what the industry can learn. But we need to hear your stories and your opinions.

Are British farmers better at co-operation than we assume or is there room for improvement? Is collaboration essential or overrated? Why do some co-operative plans work and others fail?

Send your thoughts, ideas and questions to charlie.taverner@rbi.co.uk or tweet @charlietaverner. The best messages could feature in the Farmers Weekly magazine.