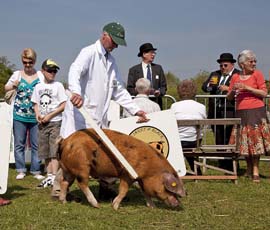 Farmers are becoming increasingly frustrated by the government’s delay in announcing a badger cull, as TB continues to spread across the country.

Speaking at the Devon County Show on 19 May, David Horton, Devon chairman of the NFU voiced his frustration.

“We haven’t heard anything, which is quite a concern,” Mr Horton said. “A year ago we had farm minister Jim Paice here at the show, who said all the right things, but we haven’t seen anything since. Farmers are getting very frustrated at the lack of progress – we could do with less talk and more action.”

The failure of any government minister to attend the show this year was an added snub to farmers’ concerns, said regional director Melanie Squires.

“This is one of the most important events in the country for farming and the rural community, with Devon being one of England’s foremost food producing counties. For these reasons alone it would have been politic to have put it in ministerial diaries.

“But we’ve also got unresolved issues like rampant bovine TB and the need to cull badgers to halt its spread, and a dysfunctional food chain discriminating unfairly against farmers, particularly in the dairy sector. These could have been raised eyeball-to-eyeball with senior representatives of a government which claims it has taken on board the need to prioritise food production in the light of predicted soaring global and UK populations.

“At the very least, it’s a missed opportunity, but to many farmers it will seem like a snub, indicative of a government that is talking a good game but has yet to deliver anything meaningful on behalf of agriculture.”

Mrs Squires expected the government to announce whether it would be sanctioning a badger cull in the next couple of months. “We are preparing the ground where we can on all aspects of delivering a cull, without knowing exactly what we’re working with. But we have to believe the government retains its commitment to a cull; if it doesn’t I really fear as to where that leaves us as a beef and dairy industry in this region.”

Conservative MP Neil Parish said a huge number of people were working towards controlling TB in wildlife. “But we have got to get it right.” Following a spate of death threats by badger extremists, the government also had to ensure all culling activity remained anonymous, said Paul Griffith, south west dairy board chairman. “It is important that the government doesn’t give out names and that we organise the cull in some sort of company structure. Hopefully the vast majority of farmers won’t feel threatened, but it is always a worry, so security will have to be heightened.”

Mr Griffith said he hoped that trained and licensed experts would be ready to proceed with a cull from 1 June 2012, starting with some sites already identified in Cornwall, Gloucestershire and other parts of the country.