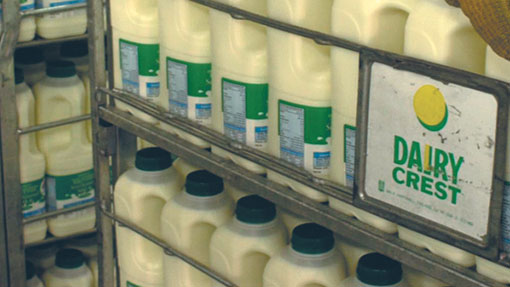 About 30 farmers have blockaded a milk processing plant in Derbyshire over cuts to the farmgate milk price.

The farmers gathered at the Dairy Crest plant in Foston to protest at the company slashing its prices by 1.25p/litre from July.

They used lorries to block a road near the factory shortly before 8pm until 2am on Sunday (1 June).

The protest, which was led by Farmers for Action (FFA), followed a blockade at the same site on Friday evening (30 May).

David Handley, FFA chairman, said dairy farmers had targeted Dairy Crest because they could see “no justification” in the firm’s decision to drop the milk price.

“Their decision to cut prices has incensed farmers. The anger is coming back, which is very, very sad,” he added.

Mr Handley questioned how Dairy Crest could announce record profits and then suddenly turn around and tell farmers it was going to cut prices.

He said dairy farmers, who were under contract to supply milk to Arla, understood its decision to cut prices in April – because their contracts were linked to the European milk price, which has been falling.

But he saw no justification in Dairy Crest’s price cut because the majority of its milk stays in the UK.

“The whole thing is going back to being unhealthy again. It’s a kick in the teeth for dairy farmers who work very hard to try and achieve something,” he said.

“Global markets have eased, but on my calculations, there is nearly 11.5bn litres of milk we produce that never leaves this country. So why are they now justifying another round of price cuts?”

Mr Handley said he had spoken to Dairy Crest representatives on Monday morning (2 June) and explained to them why they had decided to blockade the Foston plant.

At present, he said he could not rule out milk protests targeting other milk processing companies and resuming on a national scale.

Dairy farmer Paul Rowbottom, Derbyshire spokesman for FFA, was one of the farmers who took part in the protests.

“Dairy Crest announced they had made good profits. Then all of a sudden, they are dropping prices for farmers,” he said.

“I spoke to one Dairy Crest supplier last night who told me that the latest price drop would cost him around £1,500 a month.

“The bills are still big, all our fertiliser has come in a bit cheaper this year, but nothing else has come down.”

Farmers For Action said more protests could be expected this week, especially if milk price cuts were not reversed.

However, a spokeswoman for Dairy Crest defended the price cuts and described the blockade as “very disappointing”.

“We said in April that when our competitors would cut [their prices] that we would hold steady for the near future, but would have to cut at some point as well.

“Most of our farmers would not have been surprised this was coming.”

Dairy Crest cut its standard milk price by 1.25p/litre from July. Therefore, farmers on non-aligned liquid contracts will be paid 31.19p/litre, while those on the Davidstow manufacturing contract will still receive 33.19p/litre.

Dairy Crest was the only one of the big four milk processors to hold its prices for both May and June, when Arla, Muller Wiseman, First Milk and several smaller companies issued 1-2p/litre reductions.