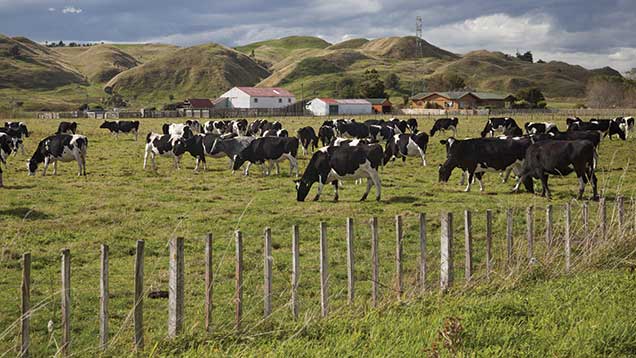 In the third part of our volatility series, we find out how farmers in Australia and New Zealand have learned to cope with sharp swings in farmgate prices and the weather

Dairy farmers round the world are grappling with volatile prices. But New Zealand’s milk producers have, so far, been better set-up to cope than most.

Charlie McCaig milks 275 Friesian Jersey crosses in the west of Taranaki, on the country’s North Island.

It is a traditional, low-cost New Zealand system, with the spring calving herd grazing year-round with only a few hundred kilos of palm kernel in additional feed.

Mr McCaig says that an extensive production system is the main way New Zealand farmers try to cope with sharp swings in price.

“We have to be low-cost enough so we can take some knocks without the wheels coming off,” he says.

“It is unsustainable if you have a business that every time the payout crashes – which it is going to – you have to take the slash-and-burn kind of approach to your farm working expenses.”

New Zealand faces the brunt of swinging prices as its dairy industry is almost entirely export-driven. Fewer than 5 million people cannot consume 19bn litres of milk a year. So the country trades about 95% of its production and accounts for one-third of international dairy shipments.

Fonterra, the 12,000-member co-op that dominates the country’s milk market, set up the Global Dairy Trade (GDT) online commodities auction, which has become the benchmark for world pricing.

Mr McCaig says this exposure has shaped the New Zealand dairy attitude, especially as there are no subsidies, intervention prices, or US-style margin protection schemes.

“If the commodity market experiences a downturn we are the first to feel it,” he says.

A long history with volatility has helped New Zealand farmers, but it does not make this crash any easier.

Returns on the GDT auction have more than halved from their all-time peak in February 2015.

Fonterra’s payout – the equivalent of British farmers talking about their monthly cheque – could head below NZD$4/kg of milk solids (12p/litre) for the first time in 20 years.

Mr McCaig says farmers are having to take pretty drastic action, with some units taking on added extra cost and becoming more intensive over the past five or six years.

At home, he is looking at cutting the stocking rate and maybe not spending as much on getting the most difficult cows into calf.

As a herd-owning sharemilker, Mr McCaig has an extra challenge. He owns his cows but has to split the milk payout with the landowner.

The farm’s total costs come to a little more than NZD$3/kg of milk solids (9p/litre), which puts it in the top quarter of performers. But nearly all farmers will be making a loss this year, Mr McCaig says.

“Every GDT that happens it drops again and it is really difficult to manage a situation when you are not really sure how bad it is.

“It is really difficult to set your budgets because every month it comes round you have to change everything again.”

Fonterra introduced a guaranteed price for a certain volume of milk in the past three seasons. It was oversubscribed this year but uptake was lower in previous ones.

New Zealand dairymen most of all have the protection of their psyche.

Subsidies were ended by the government in the 1980s. In years since, farmers have no choice but to build resilient farm systems and a tough outlook.

“The exposure New Zealand has had to the ups and downs drives a kind of evolutionary process,” Mr McCaig says.

“Every time there is a downturn it cuts out the dead wood.”

Australian livestock farmers have to battle more than just swinging prices – the climate is extremely volatile, too.

The arid landscape – his area enjoys just 250mm of rain a year – defines how he farms.

Managing his 3,200 Merino ewes and 200 beef cows, Mr Whyte’s focus is always how much grass he is going to have over the season.

“Most farmers in Australia are quite good at managing price risk for their commodity but not their climate risk,” he said. “That comes through a full understanding of the cost of their landscape.”

The uncertain climate means Mr Whyte finishes few of his own lambs or cattle.

His main commodity is wool. His annual production of 20,000kg of clean wool is marketed in 2,500kg chunks. This helps with cashflow, as wool prices tend to be more stable than stock.

For his other main income – buying and selling stock – Mr Whyte keeps a check on risk by carefully measuring costs and working out potential returns.

He uses a system from a firm called KLR Marketing. From its spreadsheet, he takes a scenario, such as taking a calf to weaning or getting a cow into calf, adds in all his costs and it lets him see what the likely profit will be.

Mr Whyte says this lets him keep a tight grip on every bit of spending and manage his three core resources: money, livestock and grass.

“When I purchase livestock we use money and we use grass. If things are getting dry you can sell stock and save grass and you get some money.

“Every single time you make a decision you are committing money and time to that livestock every day.”

Mr Whyte says Australian livestock producers do not have futures or options for finished prices, like there is in the US.

They are able to sell finished animals forward three or four months ahead. But he says this would not suit his farm, as grass growth is always uncertain. That is why he sells “seedstock” rather than primestock.

“If you have a really good season with great growth rates we might take the opportunity [to finish some stock]. We cannot rely on that because it is a really dry area.

“You could lock in a slaughter price in advance but what you have got to balance up is that might put too much onus on us for a fixed weight gain every day and that might add risk.”

Australia’s grain growers are new to riding the swell and crash of world grain markets alone – but they are learning fast.

The country exports most of its wheat and, until 2008, marketing was managed by a wheat board, which pooled growers’ returns and paid out average prices.

Now arable farmers are having to plan strategies for selling grain in volatile markets.

Andrew Freeth, who works on his 5,500ha family farm in Collie, New South Wales, says there has been a big risk management job for growers.

Mr Freeth says the greater competition in an open market initially made growers hesitant but is now working in their favour.

“Your next generation of growers coming through are really running a business – it just happens to be arable.”

A flock of 2,200 Merino ewes are put to a Border Leicester as a terminal sire, with the finished lambs and wool important income streams.

Wheat yields on the Freeth farm average 2.5t/ha but can vary from 0.5t/ha up to 5t/ha – largely down to rainfall. On the production side, they are careful to measure moisture to decide how much nitrogen is put on. In drier years, they have to be tight with cost control, but in better ones they up the inputs to maximise yields.

For marketing, Mr Freeth uses a combination of tools. They engage a broker and trade futures, hedging on offshore markets in Chicago or Paris.

They can trade swaps through agricultural banks, which let them trade quoted US wheat prices in Australian dollars.

Mr Freeth says the aim is to lock in an international price but have the flexibility to take advantage if Australian grain base values surge due to a drought. Options contracts, which have a cost like an insurance premium, are the way to cope with price risk.

“Our marketing programme is designed to mitigate risk as much as trying to lock in a good price.”

Mr Freeth is partway through a Nuffield scholarship, exploring how farmers can work together to invest in on-farm grain storage.

His home farm has 4,000t of capacity and he tries to market grain year-round, taking advantage of trade demands over the whole season.

He says this is another way to manage price volatility and has added value to his family’s business.

“Farmers typically have got one harvest a year, but grain mills and maltsters and hogs and chickens – the consumptive industries – they consume grain 12 months of the year.

“Rather than sell it all at harvest time, I am looking to use derivatives to manage price risk and service the needs of end users.”