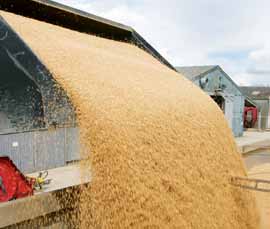 Record forward prices for the 2012 wheat crop, high production costs and the potential for huge volatility mean that growers should be looking seriously at marketing strategies for their grain, said AHDB senior analyst Jack Watts.

The 2012 crop market had the potential to replicate 2009 when we had high production costs and a big drop in market prices, he told farmers at this week’s HGCA/nabim milling wheat conference.

Milling wheat growers should be looking at forward prices for 2012 and realising that production costs could be in the region of £130-140/t before drying costs, he warned.

“Volatility has no respect for any relationship between market prices and cost of production. The one to watch is 2012 – we have record forward prices and we could see a great planting response. We have a massive increase in production costs as well.”

Looking to the end of the current cereal year, low stocks of quality wheat everywhere apart from the USA would stress the world market in the carryover period into the new crop year with the UK possibly needing to import breadmaking wheat, said Mr Watts.

Grain markets were being buffeted by political, currency and speculative factors as well as supply, demand, area, quality and weather. This could mean short-term opportunities for growers with milling wheat still to sell.

Global and UK factors had forced millers to pay up for breadmaking quality wheat this season, he said. While the nearby feed wheat futures price had risen by £101/t in the last 12 months, the May 2011 delivered breadmaking wheat price was up by £124/t over the same timescale.

Grain markets have recovered much of the ground lost in heavy falls in the middle of past week but remain very nervous, with political unrest in North Africa and the Middle East adding to uncertainty caused by tight stocks and weather factors.

The latest DEFRA/AHDB figures confirm the tightening stock position for the end of the current season, with UK wheat exports hitting 1.89m tonnes by the end of December compared with the original export forecast of 1.3m tonnes for the whole of the marketing year.

This would lead to a new all-time low stock carryout and the very tight end of season meant that any indication of a late new crop was going to create volatility in the short term, said Mr Watts.

Further volatility should be expected throughout 2011: The wheat market continued to be heavily influenced by what was happening in maize, where record harvests were needed for the next couple of years to meet growing demand and to build up stocks.

It would not take a lot to upset the US maize market in 2011-12, said Mr Watts. “I don’t think we should expect to see impressive maize yields in the USA in 2011. If we see drought persisting then this could be the cause of further volatility.”

The EU is forecast by Strategie Grains to export 20m tonnes of wheat from the 2011 crop, which was an ambitious target but achievable given good quality and a competitive price.